Who can concern to save a talented young. Soccer to keep going with Qatari national team Joint leaders Jordan and Meronk duel for maiden Qatar Masters title - Stad Al Doha DOHA: England’s Matthew Jordan and Poland’s Adrian Meronk share the lead on Sunday morning at the Commercial Bank Qatar Masters at the Doha Golf Club course. If the Polish triumphs here, he would become his country’s first golfer in the history of the DP World Tour to win a title. While Jordan...

The 46-year-old Crespo will travel to Qatar in the next few days to sign his contract which would keep him at the club until June 2023.

28 cars, including 10 and 6 entries in respective FIA T3 and T4 categories, have entered Qatar International Baja (March 24-26), alongside 29 motorcycles, six quads and one SSV in the FIM section.

There will also be a National Baja running behind main FIA event.

Congrats🎉 Al Rayyan on winning the men’s volleyball league title for the 2021-2022 season.

Hamad Al Jaadi wins men's elite title at National Road Race Championships - Stad Al Doha DOHA: The National Road Race Championship elite race got off to an aggressive start – five riders breaking clear and building a 90 second lead before swinging around into the wind. These are tough racing conditions and all Saturday’s races heavily fractured. Riders mainly coming to the finish in...

QFA announces voting process of best awards nominations - Stad Al Doha DOHA: The Board of Trustees of Qatar Football Association Awards announced the start of voting process for the nomination of best awards for the 2021-2022 season QNB Stars League (Best Under-23 Player, Best Coach and Best Player). The process of sending voting forms, in addition to the indicative li...

Pakistan likely to make changes in Test squad against Australia - Stad Al Doha LAHORE: The Pakistan Cricket Board (PCB) is likely to make changes in the Test squad for upcoming home series against Australia, Pakistan’s Geo News said. “Sources privy to the matter said that the decision regarding Test player Muhammad Nawaz’s replacement will be made in a couple of days,”...

MotoGP: Fan's activities announced during Grand Prix of Qatar - Stad Al Doha DOHA: With the stage all set for the Grand Prix of Qatar from March 4-6 at the Lusail International Circuit, the Lusail Circuit Sports Club (LCSC) has unveiled an array of fans’ activities during the three-day event. “Qatar has been hosting the MotoGP for almost two decades, gathering residents ...

Pakistan🇵🇰 spinner Mohammad Nawaz has been ruled out of the Test series against Australia 🇦🇺 with a foot injury. There'll be no replacement, PCB said.

Why is FIFA proposing a biennial World Cup? - Stad Al Doha Paris, France: FIFA will hold an online summit on December 20 to discuss the feasibility of a biennial World Cup, rather than staging the competition every four years. The proposal has drawn widespread opposition from leagues, players and supporters groups, but has notably received the backing of th...

FIFA Arab Cup showcased next year’s FIFA World Cup, says Hassan Al Thawadi - Stad Al Doha DOHA: Thousands of fans attended the final day of action in the FIFA Arab Cup as Algeria were crowned champions at Al Bayt Stadium in Qatar. The Greens beat Tunisia 2-0 after extra-time in the final to lift the trophy in front of a passionate crowd. Amir Sayoud and Yacine Brahimi were the scorers. A... Arabic proposed as official FIFA language - Stad Al Doha DOHA: Yesterday marked the UN’s World Arabic Language Day, and the culmination of the inaugural FIFA Arab Cup Qatar 2021. In recognition of the importance of the Arabic language, which is spoken not only by the 450 million people that live in the more than 20 Arabic-speaking countries but also by ...

After the end of 3rd day’s play in the second Test at Galle, #SriLanka were 46 for 2 in their second innings.

#WestIndies earlier had scored 253 all out in their 1st innings.

Italy head coach and former #ManchesterCity boss #RobertoMancini has emerged as a candidate to be appointed #ManchesterUnited manager next summer.

#Algeria open campaign with a comfortable 4-0 win over #Sudan

Stuff of dreams: Ravindra New Zealand's new Test hero - Stad Al Doha New Delhi, India: Rachin Ravindra became an unlikely hero for New Zealand with solid defence and the ability to soak in the pressure in his debut Test, and has been hailed as an all-round package. The 22-year-old stood firm with the lower order and finished with Ajaz Patel in a final-wicket stand th... 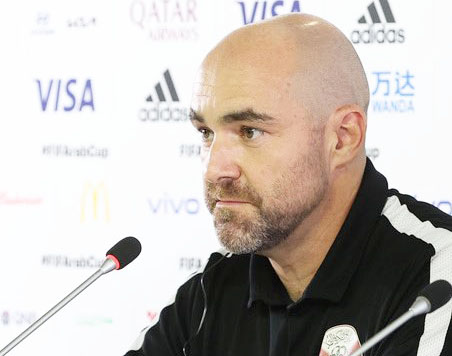 Qatar Off-Road Championship Rd 2: Saudi Arabia's Al Ghuneim wins honour in Moto 450cc - Stad Al Doha DOHA: Mishal A AlGhuneim of Saudi Arabia took the honour in Moto 450cc at the second round of Qatar Off-Road Championship at Alkharsaah on Saturday. The two-day event was organised by Qatar Motor and Motorcycle Federation. Mohammed Al Balooshi of UAE, who topped in the first round, finished a poor e...

Korea's Lee wins men's singles title as curtain comes down on Asian Championship - Stad Al Doha Mohammad Amin DOHA: South Korea’s Lee Sang-su won the men’s singles title on the final day as the curtains came down on the 25th edition of Asian Table Tennis Championship here at the Lusail Sports Arena on Tuesday. The competition, hosted by the Qatar Table Tennis Association under the aegis of...

Gulf Radical Cup: Qatar to host 7th round at Losail Circuit Club - Stad Al Doha DOHA: The Qatar Motor & Motorcycle Federation (QMMF) incooperation with Losail Circuit Club will host the seventh round of the GulfRadical Cup (GRC) for cars. Qatar will host the last round on March 24, 25, 26 next year, the QMMF said in a press release on Thursday. It also added that the federation...

Qatar face Oman tomorrow, look forward to a fresh start - Stad Al Doha Mohammad Amin DOHA: Qatar will look forward to a fresh start tomorrow in their Asian Qualifiers campaign for the FIFA World Cup Qatar 2022 and AFC Asian Cup China 2023. The Asian champions had struggled for a 1-0 win over over 10-men India in their previous game, and coach Felix Sanchez would be hop...

FIFA World Cup Qualifier: India take on Bangladesh, look for first win - Stad Al Doha Mohammad Amin DOHA: One doesn’t know what must be brewing in India coach Igor Stimac’s mind ahead of their FIFA World Cup Qualifiers Group E match against Bangladesh tomorrow. But one thing is for sure that the Croat would be looking for his team’s first win at the Jassim Bin Hamad Stadium tom...

Doha Diamond League: Aspetar to provide medical facilities - Stad Al Doha DOHA: Aspetar, the orthopaedic and sports medicine hospital, will provide world-class medical services to the international athletes at the Diamond League. Suheim Bin Hamad Stadium is all set to host the second round of the Diamond League. The League is an annual series of elite track and field athl...

Other Media/News Companies in Doha (show all)

Classified Ads in Qatar for FREE. Post your ad for free on our Classifieds Qatar advertising board and get noticed.

Through E-Tran International – is one of the leading Direct Sales & Marketing Company in the region.

ArtsQatar is the destination for information, reviews & features, on arts & cultural events in Doha & across Qatar. www.artsQatar.com

Our vision is to enable our clients to grow their businesses. They will be able to launch marketing campaigns to their products through the consumers’ eyes

Creativity is MY Vision"- [email protected]