Enjoy retirement Kyle Jarvis. Thanks for the memories.
Another talent lost.
Heath Streak banned from all cricket activities for eight years due to corruption.
The second test vs Afghanistan is about to start.
A resounding win for Zimbabwe!
End of play on Day One vs Afghanistan.
First Test against Afghanistan starts today.
The life and times of Trevor Madondo, by Liam Brickhill.

The latest news and views on all things cricket in Zimbabwe.

JUST IN: Sean Williams, the current Zimbabwe Test captain, has decided to step away from international cricket after their tour of Ireland.

However, he remains open to a white-ball return for the country in the future.

Enjoy retirement Kyle Jarvis. Thanks for the memories.

Zimbabwe fast bowler Kyle Jarvis retires from all cricket Jarvis, who last played a Test in January 2020, battled a trio of illnesses earlier this year

Tawanda Muyeye: asylum seeker who could become ‘best cricketer in the world’

Tawanda Muyeye: asylum seeker who could become ‘best cricketer in the world’ The 20-year-old, who has just won right to remain in the UK, has been pro for only six weeks, but his flashing hands and easy style are making waves in the sport

Heath Streak banned from all cricket activities for eight years due to corruption.

Favourites Zimbabwe need to be wary of the Rashid factor

The second test vs Afghanistan is about to start.

A resounding win for Zimbabwe!

End of play on Day One vs Afghanistan.

Sean Williams: Playing in Covid-19 times 'not for the faint-hearted'

Sean Williams: Playing in Covid-19 times 'not for the faint-hearted' "It is difficult. The team sacrifices a lot. They sacrifice family time, and there is a lot of alone time"

The life and times of Trevor Madondo

The life and times of Trevor Madondo, by Liam Brickhill.

africasacountry.com Trevor Madondo achieved a certain immortality in Zimbabwean cricketing lore precisely for the way in which he confronted cricket’s history as an instrument of empire.

An inexperienced squad missing a number of big names for the test series against Afghanistan.

When Kyle Jarvis had Covid-19, malaria and tick bite fever

espncricinfo.com The Zimbabwe fast bowler won't be able to play cricket for up to six months as he recovers from a trio of infectious illnesses

newzimbabwe.com Spread This NewsBy Sports Reporter FORMER Zimbabwe Cricket chief executive Dave Ellman-Brown, one of the key figures behind the country attaining Test status in the early 1990s, has died at the age of 82. Ellman-Brown passed away on New Year’s Eve at his home. He was an honorary life president of ...

Makoni back in the fold.

cricbuzz.com The 45-year-old had been serving the board as an acting managing director since September 2018

One of the most underrated players of all-time?

Australia scheduled to return to action with Zimbabwe ODIs in August | ESPNcricinfo.com

Zimbabwe could be back in action soon!

espncricinfo.com The series is subject to change dependent on the Covid-19 situation | https://www.espncricinfo.com/story/_/id/29233514/australia-scheduled-return-action-odis-zimbabwe

It's 21 years to the day since a strong Zimbabwe batting line-up looked to upset an India side missing Sachin Tendulkar. A Zimbabwe win would take them to the brink of the ICC Cricket World Cup 1999 super league, but defeat for India could put them in danger of elimation.

Honoured by Wisden, Muyeye is just getting started

cricbuzz.com It took both luck and some guts for Tawanda Muyeye to move from Zimbabwe to England. Now the Wisden Schools Cricketer of the Year has his sights set on the next frontier

Five issues that Zimbabwe must solve to move forward

espncricinfo.com The team has lost every single match on tour in Bangladesh and looks in need of a lot of improvement | ESPNcricinfo.com

Muzarabani on his way back?

thestandard.co.zw ENGLAND-BASED fast bowler Blessing Muzarabani has opened the door for a sensational return to international cricket for Zimbabwe following confirmation that his Kolpak contract with Northamptonshire is set to be …

#2ndODI | SENSATIONAL! Donald Tiripano nearly pulled off a Houdini act as he plundered a 28-ball 55 not out – his maiden ODI fifty – but that was too little too late as Bangladesh edged Zimbabwe by 4 runs. Congrats on the milestone and thanks for the thrill, Mulalo! #BANvZIM 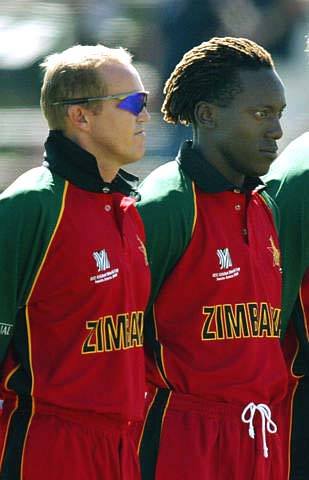 #OnThisDay in 2003: Andy Flower and Henry Olonga defy Robert Mugabe's Zimbabwean regime by wearing black armbands to mourn "the death of democracy" in their country. It was perhaps the bravest act of defiance ever seen on a cricket field. http://es.pn/1iE4V2f

My family's love affair with Zimbabwe and the Harare Sports Club

espncricinfo.com A family of cricket tragics has always made its presence felt at Harare Sports Club, right since the inaugural Test in 1992 | ESPNcricinfo.com

'The smaller teams want to play more, but they can't because the cash is not there'

espncricinfo.com Alistair Campbell talks about the tyranny of the TV rights cricket economy and why it's not realistic to expect the weaker teams to progress in all forms of the game | ESPNcricinfo.com

Masvaure, Kasuza, Ervine, and Taylor laid a solid platform to build on.

Those men in fiery red shirts

thecricketmonthly.com Supporting pre-2004 Zimbabwe was the most innocent of cricket's pleasures. Until you looked deeper

espncricinfo.com Read and watch preview for 1st Test 2020, Sri Lanka tour of Zimbabwe 2019/20 only on ESPNcricinfo.com

Zimbabwe Cricket have chosen the route of installing two different captains for the men’s national team.

Sean Williams is the new substantive Test captain, while Chamu Chibhabha has been plucked from the wilderness and will now lead the one-day international and Twenty20 international sides as interim skipper.

Test cricket is returning to Zimbabwe!

newzimbabwe.com By Sports Reporter SRI LANKA is set to kick off a busy schedule of international cricket for the Chevrons in 2020 when they tour Zimbabwe early next month for two Test matches beginning January 16. The upcoming cricket tour, which is part of the International Cricket Council’s Future Tours Program...


Other Media/News Companies in Harare (show all)

Trapped in a construct. Only a change of mindset can really FREE AFRICA.

The DailyEye News page was opened by Mr Simbarashe Kachepa who is a media student at a university. The main purpose of this page is to provide people with local, regional and international news.

The home of urban creativity

An events media company for all videography and photography.

Stay informed with daily updates about crime, entertainment, politics, and current affairs from in and around our beloved country, Zimbabwe.