Organized by the Association of Applied Geochemists (AAG) and the Sociedad Geológica de Chile (SGCh).

You may now also register at our website or click on the 'Sign Up' button on our page. Submission of abstracts and proposals for sessions is ongoing until 11th October 2019 and 3rd May 2019 respectively. Feel free to contact us via our website or any of our social media accounts for any queries.

Regards,
ICES Team.
Dear Colleagues,
ICES-2017 extends a warm welcome to our Congress. We invite you to suggest a new session or to register and submit your Abstracts. All the Congress papers can be submitted for a peer review publication to Geosciences, an open access, Scopus listed journal, with fees waived. You may consider submitting an ePoster, as well. Reputable speakers will deliver keynote lectures presenting their research advances. Looking forward to seeing you in Brunei Darussalam
Please find more details at http://fos.ubd.edu.bn/foscon/

The Geological Society of the Nelson Mandela Metropolitan University is a dynamic academic society promotes Geology and advances the interests of its members through academic and social initiatives.

The values of the Geological Society are:
Academic Excellence
Achievement
Knowledge & Learning
Care for the Natural Environment
Partnership
Community Engagement

Approximately 790,000 years ago, there were multiple cosmic impacts on earth with global consequences. Geoscientists from Heidelberg University reached this conclusion after dating so-called tektites from various parts of the world. The research group under the direction of Prof. Dr. Mario Trieloff studied several of such rock glasses, which originated during impacts of asteroids or comets.

Siccar Point is an iconic geological site on the east coast of Scotland, famous for Hutton’s Unconformity found in 1788. James Hutton was a Scottish geologist whose work contributed to the understanding of landscape-forming processes and the concept of geological time. This video by the British Geological Survey offers excellent footage of the historical unconformity, where gently sloping red sandstone overlies steeply dipping grey sandstone. The age difference between the two is approximately 65 million years. “We can see what Hutton understood at the time: that there is a huge change in Earth’s history recorded in these two contrasting sequences of rocks, and that a vast span of time would have been required for these processes to take place.”

The Geological Society of the NMMU wishes you a prosperous new year. 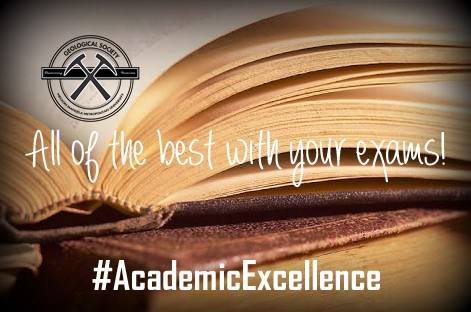 The Geological Society of the NMMU wishes all students well with the upcoming examinations.

All of the best!

These fluvial Enon Red beds were caused by rifting of Gondwana, which began around 180 Ma. These clasts supported quartzite pebbles-boulders(~350mm) of the Table Mountain Group have a red colour that signifies a high oxygen content on earth.

Image and text are adapted from the Council for Geoscience Field School Blog: http://cgsfieldschool.blogspot.co.za/2015/10/day-5-enon.html)

Celebrate spring tomorrow with the GEOS society. All students are welcome, even if you are not a Geology student or member of the society! It should not take longer than a hour and a half. See you there!

Living Rock - An Introduction to Earth's Geology movie was released Aug 13, 2002 by the DVD International studio. Ever wonder why earthquakes happen, or how ...

GEOSNMMU wishes all Muslim students and their families an Eid Mubarak.

Today is also Nelson Mandela Day - don't forget to give 67 minutes of your day to a good cause.

phys.org An international team led by researchers from the Evolutionary Studies Institute (ESI) at the University of the Witwatersrand, Johannesburg, has obtained an age from rocks of the Great Karoo that shed light on the timing of a mass extinction event that occurred around 260 million years ago.

How mining companies can beat the mineral exploration crisis

miningreview.com There is a worldwide mineral exploration crisis, according to a new report by The Boston Consulting Group (BCG). The report, Tackling the Crisis in Mineral Expl

World's largest asteroid impact site could be in Australia

Over the past 21 years the GSSA has presented drilling courses to the southern African drilling industry aimed at improving the knowledge and skills of practicing geologist. The course includes a review of all common drilling methods as well as a detailed review of all aspects of diamond core drilling.

geologypage.com The 115-million-year-old remains of a tiny toothed bird with a two-pronged tail resembling a pair of darts have filled knowledge gaps about feather evolution, scientists reported Tuesday. The remarkably-preserved 3-D specimen from northeast Brazil is the oldest bird fossil yet from Gondwana, the sup…

The Geological Society wishes all students well with the 2015 mid-year examinations. Remember the words of Colin Powell, "success is the result of perfection, hard work, learning from failure, loyalty and persistence."

geologypage.com The modern sedimentary environment contains a diversity of microbes that interact very closely with the sediments, sometimes to such an extent that they form "biosediments." But can such a phenomenon be fossilized? How far back in time can "biosedimentation" be traced? In this study for Geology, Fra…

These spiral shells are fossils of an extinct species of marine animals called ammonites. Ammonite fossils are fairly common and serve as excellent index fossils. Index fossils are fossils used to reliably identify geologic time periods. The presence of ammonite fossils usually indicates a Jurassic (200 million to 145 million years ago) or Triassic (250 million to 200 million years ago) time period.

geologypage.com Erik Gulbranson, a visiting professor at the University of Wisconsin-Milwaukee, trudges up a steep ridge overlooking his field camp of mountain tents and pyramid-shaped Scott tents in Antarctica's McMurdo Dry Valleys. A brief hike nearly to the top of a shorter ridge ends at the quarry, where picks…

Topics to be covered include:
- Exploration
- Primary and secondary sources of diamonds
- Evaluation and economic valuation of diamond deposits.
- Mine visit to Cullinan Mine, Pretoria on 23 October

miningweekly.com The South African government has formally launched a R12.5-million, 24-month strategic environmental assessment (SEA) of shale gas mining in the Karoo in an effort to understand the potential environmental risks of exploiting probable, but as yet unexplored, unconventional gas resources in the water…

Fossilized, dinner-plate size, algal mounds (stromatolites) of the Rocknest Formation as exposed at Port Epworth (Nunavut), western Canadian Arctic. The dolomitic strata of the Rocknest Formation are between 1970 – 1880 million years old. Stromatolites, here preserved in life position, constitute some of the earliest traces of life itself on Planet Earth. Photo by Marc St-Onge (GSC). This image was sourced from http://www.nrcan.gc.ca/earth-sciences/science/geology/10862

This photo shows a depositional contact between two sedimentary rocks. Conglomerate overlies sandstone, and the package has been tilted.

Today the NMMU Geology Third year and Honours classes went on a field trip in the Addo district.

Did ocean acidification from asteroid impact that killed the dinosaurs cause extinction of...

geologypage.com New research, led by the University of Southampton, has questioned the role played by ocean acidification, produced by the asteroid impact that killed the dinosaurs, in the extinction of ammonites and other planktonic calcifiers 66 million years ago. Ammonites, which were free-swimming molluscs of t…

Click here to send a message to the university
https://www.findglocal.com/ZA/Port-Elizabeth/1100805349945072/Geological-Society-of-the-Nelson-Mandela-Metropolitan-University

Other Colleges & Universities in Port Elizabeth (show all)

Insight Learning Centre is a Private Christian School, catering for Grade R to Grade 12. It accommodates all learners, may they be gifted-, average-or slow learners. The school is registered as an examination centre with the Department of Education.

This page is about everyday problems that students are facing on campus, don't be shy, just tell us your story we'll fight for you...Izwe Lethu!!!

MobiTutorZA is an innovative, educational application for mobile Android devices, developed by the GMMDC. It can be used for competitions and (CAPS) curriculum support in Mathematics (Grades 8-12) and Physical Sciences (Grades 10-12).

We are Nelson Mandela University postgraduate students and researchers working with of Professor Janine Adams as part of the DSI/NRF Research Chair in Shallow Water Ecosystems. We specialise on estuaries; their functioning, conservation and management.

A Tertiary Education Union that challenges the Norms - Affiliate to FEDUSA

CFCI Bible College Port Elizabeth's aim is to equip believers to become effective in their society and church as they walk in the full authority of Christ.

The Faculty comprises four schools which include, School of Engineering, the Built Environment & Civil Engineering, Architecture and Information Technology.

Veritas is female residence situated in South Campus at the Nelson Mandela Metropolitan University. It was founded in 1972 and accommodates 309 students.

Xanadu Residence is a house that promotes community among its students, its also promotes academic excellence and puts the needs of the students first.

VISION: The Unit strives to be the first choice in providing efficient support services for differently abled students.