We Are T-Cafe
Main Street, Bristol

Does anyone have any photos of the station's interior available for donation or copying? The RMNE currently is rebuilding the former ticket agent/operator's office area. Although we have the location of the walls between the office and waiting room we do not know any details of the ticket window(s) or office door locations.

Passengers last used the station in 1958, and after years of neglect the station later fell victim to a fire set by vandals in 1993. Since operations on the new Naugatuck Railroad commenced in 1996, our volunteers have cleaned and stabilized the structure in preparation for a full restoration. With your support, we can meet our goal of restoring Thomaston as a complete and functional railroad station of the 1950’s.

Our friend Turbo wants everyone to help on this as they can.

Turbo here friends, its and Facebook will match any donation you give to my home at the Railroad Museum of New England when you donate via Facebook. Help me keep these trains running and to play on today!

We've begun our repair and restoration of the station masonry walls, starting with the north end facing East Main St. Here, a couple of the brick craftsmen from Kronenberger & Sons Restoration are grinding into the mortar layers between bricks before replacing with new mortar consistent with original materials used in building this 1881 era Thomaston Station. Funding for this project was made possible by grants from State of Connecticut Historic Preservation Office, from the 1772 Foundation, Tom E. Dailey Foundation and Thomaston Savings Bank Foundation. There will be more funding needed for repointing the other station walls over the next few years. Learn more about us and where to send donations on our website: www.rmne.org/join/

We are truly honored to be included in this round of grants for our station.

The Board of Directors of the Tom E. Dailey Foundation Inc. is pleased to announce the approval of the following grants totaling $44,765 at its August 9, 2014 quarterly board meeting.

This Minnesota group, formed in 1992, is preserving the history of The Chicago, Milwaukee, St. Paul & Pacific Railroad, commonly known as The Milwaukee Road. They have several early Milwaukee Road railroad cars donated by Canadian Pacific.Grant funding will be used to repair/restore a 90-foot long turntable built in 1913.

The project is to restore the Beaver rail station back to its original appearance. It will house a local genealogy collection and two classrooms. Grant will be used toward renovation of the exterior of the station.

The group was formed in 2010 as an educational effort to provide Civil War railroad history to the general public. Visitors board a replica train which travels a 30 mile route taken by Lincoln to deliver his Gettysburg Address. The grant is for the purchase and installation of a handicap lift.

The group is restoring Atchison, Topeka & Santa Fe 4-8-4 steam locomotive No. 2926 to running condition—an Albuquerque landmark of historical value. The project began in 2000 and is expected to be completed by 2016. The locomotive will be used to provide not-for-profit excursions in New Mexico in celebration of railroad heritage. The grant is for a portion of the cost of fabricating a modernized version of a brake stand subsystem to meet FRA certification.

The project is the restoration of a Class CA-9 caboose built in May 1967 for the Union Pacific Railroad. The grant request is for a portion of the $12,000 estimated cost to relocate and restore the interior and exterior of the caboose. The expense is for materials only. All time to be provided by retired railroad workers and Eagle Scouts.

Grant will be used for insulation of the exterior walls of a former trolley station as part of a capital improvement project for completion of a transportation museum. The main goal of the project is to create and operate the trolley station museum as an educational and interpretive center emphasizing the industrial history of trolley, railroad and canal transportation in northwestern PA. Eight supervised high school vocational education students will work on the restoration project.

Among the group’s collection is the “Rippling Stream,” a stainless-steel, sleeper-buffet-lounge car. This car was originally delivered to the New York Central Railroad in 1949. The group was founded in 1989 and runs historic rail excursions through the Texas Hill Country, serving 27,000 passengers last year.

This group has operated a working railroad museum and display site in North Judson, Indiana, since 1988. They preserve and maintain 33 miles of former Chesapeake & Ohio Railway track.The grant request is to replace 250 railroad ties.

NESCO was formed in 2012 to purchase, relocate, rebuild, and care for Maine Central #470 steam locomotive. Once complete, the locomotive will be a steam technology classroom. Funds will be used to transport the locomotive via a flat bed truck.

This Alamogordo, New Mexico, railroad historical preservation group is restoring a Chicago &Eastern Illinois caboose. Funds will be used to upgrade the electrical service and to replace the platform to the caboose.

This organization, in existence for 46 years, owns and maintains the historic 1881 Thomaston, Connecticut Railroad Station. The station is located in the central business district of Thomaston, and is listed on the State Register of Historic Places. The group operates Naugatuck Railroad, a 19.5 mile tourist train ride, and conducts special events at the station. Funds will be used for masonry wall repairs.

This Allentown, PA, based group—in existence for 52 years—is restoring a Johnstown Traction Company (#311) trolley that served the city of Johnstown, PA. It is a Birney Safety Car built in 1922 by the Wason Manufacturing Company of Springfield, MA. Safety trolleys are designed to operate with just a motorman, saving the cost of the conductor. The car, which ran on the museum’s line, was removed for repairs in 2004 and is now undergoing restoration to working condition.

Ride the Rutland 260 and Civil War musicians - both have been very popular at the Steamin' With Sadie event today. Tickets at www.rmne.org

I hope you enjoy this.

From the grand opening of the Dutchess Rail Trail in New York. The restored former New Haven Railroad Hopewell Jct. depot is the trailhead for this new recreational trail.

11/16/2013 The Depot hosted a crowd of people for the official opening of the Dutchess Rail Trail.

Welcome to Connecticut's newest passenger station! MTA Metro-North Railroad will be opening a new station at West Haven this Sunday!

Sigh, we miss her already! All of the members and volunteers of the Railroad Museum of New England loved having Lehigh Valley Coal Co #126 visit us the past 3 weeks. Hope to see you again next year Sadie!

126 is getting up steam early in the morning, before making the run seen in the video link.

Lehigh Valley Coal 126 pulling up the grade at MP 7 in Thomaston. A great summer morning, with the sound and sight of steam power as a bonus!

Steamin’ with Sadie at the Railroad Museum - Unwind from the Daily Grind!

This will be our last weekend to feature Steamin' With Sadie this year. Do you have your tickets yet?

blog.ctnews.com This June, Steamin’ With Sadie will be the star attraction at the Railroad Museum of New England’s Thomaston Station as restored Lehigh Valley Coal Company Engine #126 leads weekend trips over our scenic railroad between June 8 through 23, including Father’s Day Weekend. Sadie, an 0-6-0 coal-fired s...

Cool! Somebody dropped off a real working steam engine for me to play with! Thanks, Flagg Coal!

Sadie has arrived in Connecticut and has been safely delivered to the historic Thomaston Station. We need to get her ready for running here the next three weekends--probably first on the agenda is a bath.

Here's some of the spring sprucing up going on at Thomaston Station before we open again with train rides Memorial Day Sunday, 5/26.

This view of Thomaston Station is from July 23, 1931... The old freight house can be seen at left, and the brick water tower behind the depot.. RMNE Collection.

Grand Central Terminal is getting spiffed up for its big birthday party in a couple of weeks...

Stephen Gow visited Thomaston Station in 1994 and this is what he found... It didn't look good for the future of this 1881 Victorian after fire gutted the interior... Two years later the Railroad Museum of New England would arrive and begin restoration and stabilization efforts.

From our friends at Berkshire Scenic Railway Museum... As you can imagine, we like railroad stations, and we like them more when they are preserved for everyone to enjoy! :-)

We are excited about the acquisition of Stockbridge Station for additional museum activities. We thank you for your support as we move into the 2013 season. We've got some great things planned for the coming year!

We love Charlotte Hungerford Hospital. This is their fourth year tonight hosting all their employees and familes on our Northern Lights Limited train rides. 400+ happy parents, grandparents and kids with their own special trains tonight.

Our depot is decorated for the holidays and there's still time to get in a train ride before the end of 2012! Buy your tickets at http://rmne.org/!

rmne.org Santa visits ALL our December train rides - The Santa Express and the Northern Lights Limited! What a great way to get into the holiday spirit! Don't wait, these trains fill up quickly. Buy your tickets online now or call (860) 283-7245 to purchase from our agent. Photos by Scott Hartley >> See our ...

Many thanks to Connecticut Community Foundation for recognizing all the hard work by our many volunteers on our special events by awarding RMNE a $1,000 Sponsorship Grant. We will proudly display their sign in the station during our December Santa Express and Northern Lights Limited events!

Getting ready for the holiday season at Thomaston Station! Ride our fun Northern Lights Limited and our Santa Express trains! Buy tickets at www.rmne.org

Getting into the holiday spirit at Thomaston Station!

All decked out for Northern Lights Limited at Thomaston Station

Many parts of Connecticut, especially along the coast, are recovering from the effects of Hurricane Irene. You can help by offering support to the American Red Cross. http://www.redcross.org/ct/donate

redcross.org There are many ways to donate to the American Red Cross Connecticut. Please help today! The train station was once the center of the universe... It's where you bought your tickets, met family members, got your mail, sent telegrams, picked up parcels, shipped freight, and traded gossip. What are some of your train station memories?

Fall Foliage train rides on the Naugatuck Railroad have been quite popular this season! Order your tickets today so you're not left at the station... www.rmne.org.

Like old train stations? Here's another country depot restored as the centerpiece of an operating railroad museum in upstate New York.

rgvrrm.org The old Erie Railroad depot at Industry has a long history stretching back to the late 19th century. The tracks in front of the depot were laid in 1853 by the Rochester & Genesee Valley Railroad, and the first depot on this site was built at the same time. From 1853 to 1874, this stop served the vil...

Boston & Maine GP9 1732 has been a part of our collection for many years, and our volunteers are actively making repairs to return her to service once more. In the meantime, enjoy this photo of 1732 at work for her original owner at East Deerfield, Massachusetts in 1973! Photo by George Hamilin.

Here's a peek inside Thomaston Station... This was the old information booth from the passenger station in Hartford, Connecticut. We salvaged it and put it on display!

Another view of the Thomaston station area looking south, circa 1929. The freight house is on the left, the station is on the right, and the peak of the roof of the brick water tower can be seen just behind the station. Also notice the Sinclair H-C gasoline tanks at the fuel dealer... There are still fuel storage tanks there today! 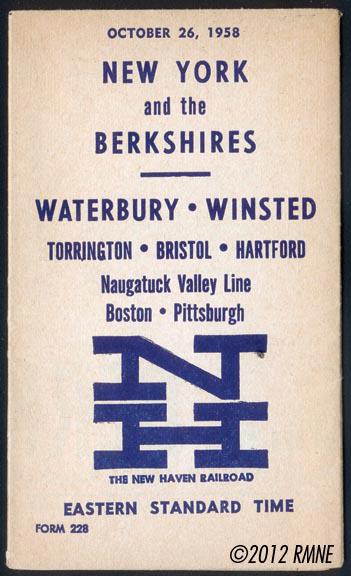 This timetable from 1958 shows passenger train schedules from the New Haven Railroad between Bridgeport, Waterbury, Thomaston, Torrington, and Winsted.

Other Thomaston transport services (show all)