Full Service CPA Firm in Osage Beach Missouri. CPAs and Tax Attorneys, and less than the cost of your current accountant or tax preparation person.

The new tables “give you about one to two years more in life expectancy.”

Tax Surprise! If You Received COVID Benefits, You Could See No Refund — or Even a Bill

No fact-check is needed. This is, unfortunately, true.

Tax Surprise! If You Received COVID Benefits, You Could See No Refund — or Even a Bill If you are one of the 75% of Americans who receive a tax refund annually, 2022 could bring an unwelcome surprise. Your tax refund could be smaller, non-existent, or you may even find that you owe the...

Yes, this is true.

A Congresswoman says President Biden’s Build Back Better plan "includes $80 billion in funding to hire some 89,000 more IRS agents who will be tasked with "spying" on Americans' bank accounts" like socialist countries around the world do.

Opinion: Biden’s presidency is already showing signs of fizzling out

Tthere’s little reason for Republicans to cooperate with the president on much, certainly not his plans to raise taxes. The president wants to hike the top tax rate to 39.6% on individuals earning more than $400,000, or $450,000 for couples, and there would be a 3% tax on wealthier Americans with adjusted income beyond $5 million a year.

Corporations would see their rate lifted to 26.5% from the Trump-era 21%. There are other taxes too, but you get the idea.

The Tax Foundation, in a revision of prior estimates, said last week that the overall Democratic proposal “would reduce long-run economic output by 0.98 percent and eliminate 303,000 full-time equivalent jobs in the United States. It would also reduce after-tax incomes for the top 80% of taxpayers over the long-run.”

Opinion: Biden’s presidency is already showing signs of fizzling out The president is taking hits from all sides — even his gargantuan infrastructure plan faces some Democratic opposition.

But, why would they pass a tax law to only help the uberwealth in CA and NY? Are they no longer the party for the middle class?

The sneaky tax move Democrats are planning They hope nobody notices, but Democrats hope to restore the SALT tax break that mostly benefits the wealthy 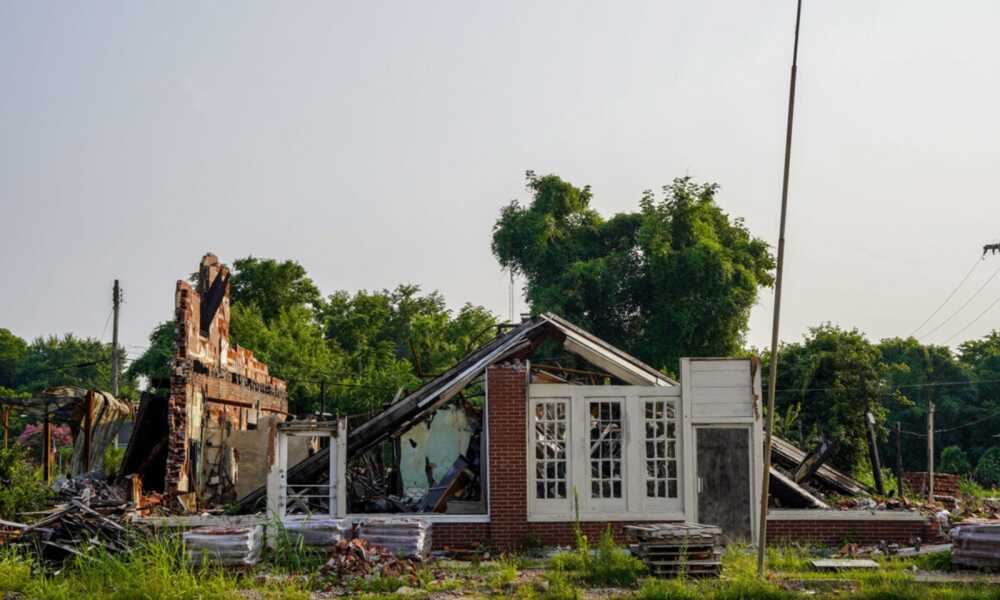 Taxes separate dying Illinois from thriving Missouri CAIRO, Ill. -- On the I-57 highway through Illinois, time seems to go backward with each southbound mile. The houses and cars in the yards get older. As years pass, town populations shrink. Eventually, homes turn back into piles of disconnected wood and glass, then empty lots. At the end of the high...

Such lies. Here are the FACTS:

Meanwhile, the share of income earned by the top 1 percent of taxpayers fell, to 20.9 percent in 2018 from 21 percent in 2017. Their share of federal individual income taxes rose by 1.6 percentage points to 40.1 percent.

The top 1 percent of taxpayers paid a 25.4 percent average individual income tax rate, which is more than seven times higher than taxpayers in the bottom 50 percent (3.4 percent).

5 tax hikes that may be coming under Biden: strategist

-Raising the corporate income tax rate to 28% from 21% (which will lower the stock market, and increase utility (electricity) rates).

-Doubling the global intangible low-taxed income rate to 21% from 10.5%.

-Taxing capital gains as ordinary income (at a top tax rate of 39.6%) for those earning more than $1 million a year.

5 tax hikes that may be coming under Biden: strategist President Biden and his administration may soon propose several tax hikes. Here is where they could come.

"The Internal Revenue Service said in mid-February that it had yet to process 6.7 million individual income tax returns for 2019".

IRS Still Working on Last Year's Tax Returns, May Extend 2021 Tax Deadline Amid recent requests by the AICPA and National Association of Tax Professionals that the IRS extend the 2021 income tax filing season, millions of Americans are still challenged by a backlog at the IRS of income tax returns from last year.

The results are in, and the top Two Accounting Programs (out of 521 collegiate accounting programs) are BOTH in Missouri.

Truman State takes the top spot with Mizzou coming in at number two among all college accounting programs.

For the third year in a row, President Trump gives Federal Employees another day off. #4dayweekend

All federal employees will be excused from duty on 24 December

“The middle class will not be exempt,” he added. “Tragically, it will punish them. It isn’t going to punish us.”

Taxes are 'funny' like that. Roughly half of the Country 'likes' the idea of 'higher taxes on the rich', until they realize that - by definition - those already paying taxes are the 'rich', and then 'they' have to pay the very higher taxes that they originally supported. And, suddenly, it doesn't seem like such a great idea...

While Mr. Biden has not declared his position on Court-Packing, nor a list of his proposed Supreme Justices, nor replied to the Hunter Biden quid pro quo and how much Hunter shared with Joe... Joe has let us know that he wants to put an 'End' the traditional 401(k). Obviously, this is just a bad idea.

forbes.com Will employers still sponsor retirement plans if tax deferral is removed? Plus: why retirement credit supporters are comparing apples and oranges.

There is little doubt that Biden's proposed increase in taxes 'at every level' would cause negative economic ripples throughout the economy. Most small businesses cannot handle the size of the increases in taxes that Biden proposes. Over half of the Country works for a small business.

Workers at a Florida manufacturing company reportedly said they're feeling threatened after its president sent all employees a letter suggesting they would be laid off if Democratic nominee Joe Biden wins the presidential election.

Daniels Manufacturing Corporation president George Daniels reportedly wrote a letter with recent paystubs reading, "If Trump and the Republicans win the election, DMC will hopefully be able to continue operating, more or less as it has been operating lately ... However, if Biden and the Democrats win, DMC could be forced to begin permanent layoffs in late 2020 and/or early 2021."

Summary: Biden = Higher Taxes for you and your family.

accountingtoday.com This article looks at a few key components of the presidential nominees' tax positions.

Corporate execs concerned about taxes going up under Biden

Summary: Biden = Higher Taxes for Employers and the companies that you have invested in via your 401k.

accountingtoday.com C suite executives are far more concerned about changes in corporate tax policy during a Biden administration than if Trump is re-elected.

accountingtoday.com Hedge funds are planning to expand their presence in Florida, adding to a migratory trend as wealthy residents of northern states face the threat of higher taxes.

California Taxpayers Can Check Out Any Time They Like, But Lawmakers Still Want To Tax Those Who Leave

It is like a song from the band, The Eagles, "you can check-in, but you cannot check out"!

forbes.com California lawmakers are considering not only retroactive tax hikes, but also tax hikes on people who flee the state. Even if California legislators adjourn without a passing another round of tax hikes this year, more tax threats loom on the Golden State's November ballot.

fool.com The former vice president is aiming to generate up to $3.7 trillion in added federal tax revenue over the next decade.

Who benefited from the Trump Tax Cuts? The results are in: "Americans paid almost $64 billion less in federal income taxes during the first year under the Republican tax overhaul signed into law in late 2017 by President Donald Trump, with the sharpest drops clustered among taxpayers earning between $25,000 and $100,000 a year." Don't let the media tell you it only benefited 'the rich.'

marketwatch.com Trump is pledging another tax cut, while Democratic candidates vow to increase taxes on the rich and corporations.

"Taxes" It is the worse part of the Monopoly game! :) #TeachThemYoung

“While I can’t stop laughing!!....This is the reality!....This boy is crying from losing majority of his income to taxes in a Monopoly game!!....wait till you start working!!. https://t.co/vxcOAHTZYt”

IRS not processing paper tax returns due to coronavirus

Make sure that you: #EFile

taxprotoday.com The Internal Revenue Service is encouraging taxpayers to file their taxes electronically during the three-month extension period for this year’s tax season.

Many Americans won't get coronavirus checks. Here's a look at who is ineligible.

Coronavirus checks, not everyone is eligible.

news.yahoo.com The list of those left out includes most college kids, immigrants without Social Security numbers and some disabled adults.

“Social Security recipients who are not typically required to file a tax return need to take no action, and will receive their payment directly to their bank account,” said Treasury Secretary Steven T. Mnuchin in a statement.

irs.gov IR-2020-61, March 30, 2020 — The Treasury Department and the Internal Revenue Service today announced that distribution of economic impact payments will begin in the next three weeks and will be distributed automatically, with no action required for most people. Updated with new information for se...

"During this period, the IRS will generally not start new field, office and correspondence examinations. We will continue to work refund claims where possible, without in-person contact."

forbes.com IRS's People First Initiative includes sweeping changes to installment agreements of taxes due, offers in compromise, changes to audit activity and more. Most new tax audits are on hold, and even new passport restrictions are also not to be commenced.

It is with great sadness that we inform you of the passing of Geoffrey Stein. Geoff passed away on Saturday, February 15, 2020. Geoff had been a valued member of our team since 2012 and will be missed. Please keep Geoff’s family in your thoughts as they go through this difficult time.


Other Business Services in Osage Beach (show all)

Skelton Key & Lock, AKA AAA Lock Service, is a family-owned business providing 24/7 Emergency Lockout Services in all areas within the Lake of the Ozarks.

Have projects to manage? Our planroom saves time & money Upload all your project files List as public or private Send out email/fax bid invites Receive & manage ITB responses Track all planholders All on your own custom planroom Looking for projects?

Canvas and Uhpolstery shop at lake of the ozarks, manufacturing enclosures,custom boat covers as well as Marine and Auto uhpolstery. Custom bimini Frames

We are a locally owned accounting/tax office with more than 100 years of combined experience.Specializing in Bookkeeping,Accounting, & tax filing

Your Premier Copy, Print, Pack and Ship Company at the Lake of the Ozarks

Jeff Bethurem, provides all insurance needs for your family or business. Give Jeff a call today 573-348-1731

It is the mission of the Bagnell Dam Association of REALTORS® to provide education, services and tools which allow members to better serve their industry a