General Microcircuits, Inc. is a global electronics manufacturing company. At GMI, our goal is to provide our customers with the highest quality, most reliable products, at the lowest possible cost.

We attribute our success to our commitment to:
- Long term, empowered employees
- Innovation and cutting-edge equipment
- Strategic partnerships

These areas of commitment benefit our customers by providing:

has been providing simple solutions for circuit board manufacturing since 1980. We design new products and improve existing ones, supporting the entire process from concept through production, serving a wide range of markets, including industrial, commercial, telecommunications, medical, and defense. 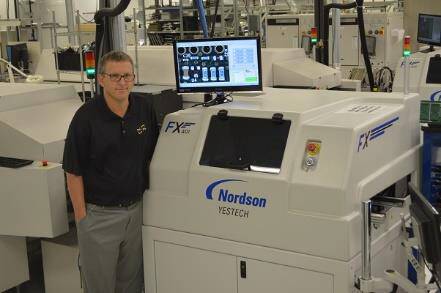 GMI & Nordson YESTECH – Strategic Partnership GMI has worked with Nordson YESTECH and its automated optical inspection (AOI) solutions since 2010. It is estimated that approximately 98 percent of all the components GMI installs on a printed circuit assembly go through the YESTECH AOI machines. Year after year GMI chooses to stay with YESTECH…

Costa Rican President Luis Guillermo Solis Visits GMI and the Charlotte Area On May 13th and 14th, 2015, General Microcircuits had the opportunity to host and coordinate the itinerary for Costa Rican President Luis Guillermo Solis and his entourage. Although only in Charlotte for less than 24 hours, he had a chance to connect with many in the Charlotte region. After…

President of Costa Rica Comes to Charlotte GMI welcomes the president of a Central America to Charlotte. President Solis spoke at a dinner arranged by Dave Dalton and also at a World Affairs Council of Charlotte luncheon which is a part of the organization’s Presidents Series. Read Article

Expansion, Capacity and Capabilities Continue at GMI Over the past year, GMI has made significant investments to meet customers’ growth. First and foremost, GMI has increased its SMT placement capacity in North Carolina three-fold (1,500,000 placements per week). The purchase of the Juki FX-3 SMT placement line enables GMI to run assemblies with…

Manufacturing as a home for women

Manufacturing as a home for women Tracy Bates, director of quality at General Microcircuits Inc. in Mooresville, was accustomed to being the only woman on the floor, but she says manufacturing has been accommodating and has offered opportunity for advancement. A graduate of Georgia Tech with a degree in chemical engineering,...

IMPACT Feature Article – An Upgraded Quality Management System at GMI GMI was featured in the UL/DQS newsletter “Impact”. This newsletter goes to UL/DQS clients all over the globe. Click here for the featured article on GMI in the Impact newsletter

Cover of CRP Economic Development Magazine GMI donned the cover of CharlotteUSA’s Economic Development Annual Publication. GMI is a founding member of E4 Carolina, a not-for-profit corporation that promotes economic growth, employment, productivity and prosperity by cultivating a collaborative energy cluster in the Carolinas region. The...

Production Enhancements GMI continues to upgrade its equipment and expand on its capabilities. GMI recently replaced older models of Solder Paste Printers which were no longer under service contract with New Juki Printers for our Costa Rican location. Dependability, capability, serviceability and ROI are the...

Supplier Symposium Review GMI invited its key suppliers to Daveste Vineyards for its Fall Supplier Symposium. Calvin Ward, long-time Vice President of Global Supply shares, “GMI prides itself on a skilled workforce to support its Global Manufacturing Operations. Our associates efforts are for naught without the...

Tracy Bates – GMI’s First Black Belt – New Director of Quality – Lean Champion Tracy joined GMI in October 2013. As Director of Quality, Tracy is responsible for investigating when supplier or customer issues arise as well as serving as the ISO 9001 Management Representative. She is also working to develop the lean culture at GMI, in both North Carolina and Costa Rica. GMI…

GMI and other Greater Charlotte Region Partners Travel to White House to Talk Strengths and Needs in Manufacturing David Dalton, President/CEO of GMI, Mayor Miles Atkins of Mooresville, and a Consortium of business, public sector and regional leaders recently returned from a trip to Washington, D.C. where they discussed the successes, opportunities and constraints of advancing the internationally prominent...

Today in America, Hosted by Terry Bradshaw Highlights Mooresville, NC GMI headquarters and domestic manufacturing plant is located in Mooresville, NC. Just a few miles outside Charlotte, Mooresville is not your run-of-the-mill small town. The atmosphere and business climate make it a wonderful place to live, work and build a global business. Watch the video to see...

Nick Harris Speaks About the Value of UL DQS to GMI

Nick Harris Speaks About the Value of UL DQS to GMI Impact, the UL DQS newsletter, interviewed Nick Harris, our VP Global Operations for their Spring 2013 issue. Nick spoke about GMI’s UL certifications and their importance to our company. UL DQS is a certification body that assesses and certifies management systems. They provide independent...

Nick Harris with GMI talks about JUKI Nick Harris, Vice President of Global Operations, speaks about why our purchase of JUKI equipment was one of the best decisions made by GMI. According to Nick, JUKI is the best in the industry due to it’s capabilities and great repeatability, along with the lowest cost of ownership.

Essential Costa Rica Costa Rica is GMI’s near-shore solution to overcome reduced lead-times and address increasing costs. Recently we doubled our manufacturing space there for continued growth. The reasons we chose Costa Rica over other options were many, including similar culture and a young, educated, motivated...

‘Silicon Valley of Energy’ Takes Shape in Charlotte USA Charlotte Douglas International Airport plus other transportation assets allow the company to expand its reach to all markets east of the Mississippi as well as Texas, says David Dalton, president of General Microcircuits. Read the article

Associates’ Legacy Wall GMI’s success has been based on the loyalty, hard work and dedication of its associates. In order to showcase the number of long-term associates, GMI created the “Legacy Wall”. Starting with Nick Harris, Vice President of Global Operations and who has been with GMI for 33 years, and ending with…

GMI’s 33rd Birthday Back in February 1980, GMI began in a small, unassuming structure, sharing space with a Beauty Parlor. In celebrating its 33rd year, Staton Williams, a founder of GMI and now the General Manager of GMI de Costa Rica beams as he describes his feelings of a grown-up GMI. “I couldn’t…

IPC Certification GMI’s success starts with its valued associates. All associates in North Carolina are required to be IPC Certified. This ensures an unparalleled level of quality workmanship. In an effort to ensure the level of performance in Costa Rica, GMI’s management has committed to invest in IPC...

GMI Awarded CEM Top Supplier Award GMI was this year’s recipient of the prestigious M.J. Collins (founder, President and CEO of CEM) Supplier Recognition Award. Dr. Collins commented during the awards presentation, “General Microcircuits has proven to be an invaluable partner in CEM’s continued growth as the leading global...

Other Audiovisual equipment in Mooresville (show all)

Aftermarket Automotive and Marine audio products and installation. Offering mobile services to your