One Love Manassas is coming up! May 18th-20th, save the date. Check out the website for details...

Chef/ Artist/ Author John Gargone Gives up 40+year career for a higher calling.
John acquired a neglected property that was littered out and full of leaves and walnut shells for many years. It would take well over 100 55-gallon bags packed tight to get rid of all the debris. John applied his culinary training in developing systems to arrive at labor efficient cost-effective solutions. Starting with a metal tube he bent it into the shape of a U then held this inside a trash bag to keep it open. Made a few modifications to that and before long John was filling that 55-gallon bag in under a minute, ending up with 126 50-Gallon bags of debris.
Over the next 2 years John modified the prototypes of his invention “Bigmouth Leaf and Debris Bagger” until it was up to his standards.

In the early spring of 2016 John noticed all the highway construction in his current state of Virginia. The roadways were being expanded which meant the litter had to be picked up and bagged from within the forest that lined the highways. Hundreds of bags of litter were collected. John approached a group of people that were bagging the litter and found that they all used a stick to keep the bag open. immediately John retrieved a Bigmouth Bagger from the car and reconfigured it to keep their litter bag open and gave to a worker. They were thrilled about it so much they called their foreman who drove 20 minutes to meet him at the highway location.

John researched litter in the USA and the numbers were beyond belief. John looked for litter and found in places you would never notice. Being an outdoors man and a lover of nature, he became very upset about the situation and decided to do something about it.
In the spring of 2016 Chef John resigned from his culinary career to pursue his new-found passion to help the anti-litter cause by developing a device to increase productivity for the millions of volunteers who that donate their time to pick up litter.

Currently John is campaigning to donate his product to a wide variety of anti-litter organizations from the Department of Transportation to Keep America beautiful with an army of 5,400.000 in 2017 collecting a staggering 62 million pounds of litter and debris. John sent in some samples and Keep America Beautiful has requested 1000 Over Shoulder Litter Bag Holders and 400 Bigmouth Leaf Baggers. KAB has also invited John to attend their National Conference in January. This organization as with many others rely on donations. They can use our help.
September 7th2017 John launched his 30 day campaign at www.kickstarter.com
Please support John and his project to help in this never-ending battle to clean up our land.
Title of his campaign is Big-Mouth Bagging Litter, Leaves & Debris

###
For more information about John Gargone and his project visit www.bigmouthbagger.net and www.foodgarnishing.com. E-mail John directly at [email protected] Contact John directly at 540-641-1934

Our company, Times Community Media, has changed to "Virginia News Group" to reflect our growing footprint in the state. Virginia News Group is a family-held multi media publishing firm based in Northern Virginia.

The company strives to connect local residents with their community by focusing on highly relevant, local news. The newspapers and magazines have garnered hundreds of national and state awards for excellence, including "Best in State" from the Virginia Press Association three years in a row for the Loudoun Times-Mirror in 2011, 2012 and 2013. The company is on the leading edge of digital news and

advertising. Its graphics and marketing department has consistently taken top honors from the Press Association for advertising effectiveness. Virginia News Group is the dominant source for news and advertising in the Northern Virginia region.

The staff at the Loudoun Times-Mirror takes on a challenge from sister papers the Fauquier Times and the Prince William Times.

Our open house in the new HQ

Each year the Loudoun Times-Mirror celebrates some of the county's most outstanding senior students, chosen from a spectrum of scholastic pursuits, such as c... 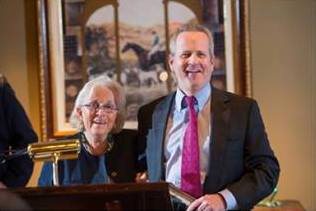 The Fauquier Times was honored by the Chamber as "Best Large Business of the Year 2013" at the annual gala. Peter Arundel and his mother, Peggy, accept the award for the newspaper staff and their exceptional community involvement. Thank you Fauquier Chamber!

This power point shows newspapers on the uptick in the second column on research by industry authority Gordon Borrell.

Turns out that Times Mirror reporter, Trevor Baratko, knows a thing or two about using an IPhone on his way to Breaux Vineyards "Aphrodisiac Dinner" in Purcellville.

The Loudoun Times Mirror staff stands on the front steps of our 100-year-old building for the last time this Christmas before moving to our sparkling new digs at Village at Leesburg. The building will be demolished for a 90,000 s/f commercial office building this spring, but the face of the building (shown here) will remain intact for historical preservation. We move in two weeks.

The oracle is in our corner! What took him so long?

blog.realmatch.com Chairman and CEO of Berskhire Hathaway, Warren Buffet, says he believes newspapers have an advantage when it comes to audience engagement.

Founding family. Nick and Peggy Arundel founded the company in 1963 with their purchase of the Loudoun Times-Mirror. Over 150,000 newspapers circulate the Northern Virginia region today under the ownership of their son, Peter (moi).

Op-Ed columnist, Bruce Smart, showed us his yearlings on his farm in Upperville.

Our redesigned newspapers rolling off the press at 2 am at the Fredericksburg Free Lance Star.

The Loudoun Times Mirror wins "Best in State 2013" for the third year in a row from the Virginia Press Association.

Other Advertising Agencies in Leesburg (show all) Escobar Vision was built to provide clients excellent graphic visuals to help grow your journey in a wide open market. Full service Web development firm, designing sites that are easy to find and easy to use. https://www.huberspace.net www.LocalOnlineVideos.com/promotion Ifyour business is a one-man operation or a Fortune 500 company, in order to be successful in today's Internet driven world it is imperative that you have a strategic Video Marketing plan that is right fo We are a full-service creative agency located in Leesburg, VA.