Got a few smaller spots left open. Just about to finish the wrap up and hit the print button. Let me know if you interested.

Can’t thank everyone enough already on board for this year!

Wow! It's been busy the last month. Here is a quick overview of what we have been up to here at Simpson Motorsports!

Here's a quick update on what we've been up to the past couple of weeks!

Simpson Motorsport now has the capability to mount/balance wheels and tires! Whether it's your daily driver or your race car, we have the tools and experience to maintain your vehicle.

Freshened up the head on this M20 - decked, refaced valves, and new rockers. Give us a call or message for a quote on your BMW today!

Here's a cool pair of Mercedes we had the pleasure of working on recently...

Intercooler upgrade! Replaced the inevitably brittle plastic intercooler piping with upgraded tubing and a bigger intercooler on this beautiful M235i. Ask us about the tuning & downpipe!

Beautiful 2002 in for restoration and maintenance

Update on what we have been up to recently! 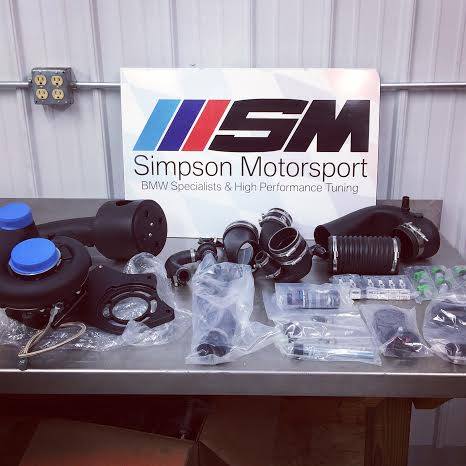 Making some good progress on the e30 m3's.

Dyno Day for Simpson Motorsport, we got some baselines for our E30 M3! Can you guess how much power it was putting down?

This week we got ahead of ourselves and dropped the engine on the project E30 M3 restoration. Soon we will be dropping the rear sub frame and prepping the car to be sent to sandblast.

It's an E30 S52 Swapped kind of day!! Let us know if you need parts for your upcoming winter project.

E30 S52 swap all buttoned up and running great!! Looking into different gears for the differential for more go fast. Also the E30 M3 has taken in some parts, just waiting on the tail panel and a lot of rust will be gone!! Make sure to prepare your BMW for winter, its just around the corner.

Last weekend we drove up to Wisconsin to pick up another fun project and will be updating its build/restoration on the website! A 1990 BMW E30 M3 with just under 135k miles.

The 550i engine swap is all done! The car runs great and looks just as good.

Engine is out of both of the 5 series and progress is going smoothly. Notice how they flipped the heads so now the exhaust and intake manifolds have switched places. Now the twin turbochargers sit on top instead of on the sides. The shorter distance makes for a faster spooling of the turbo.

Been really busy lately in the shop so here is a little update on the E92 M3, we put on an H&R Front Sway Bar, a Borla Exhaust and got us a set of BF-Goodrich g-Force Rivals to test out.

Z3 M coupe is SOLD and on its way to North Carolina!


Other Automotive Parts & Accessories in Iowa City (show all)

We are a full service, automotive repair and maintenance shop serving the Iowa City area with many y

We are a local family owned garage, specializing in the service and repair of imported vehicles sinc

Carousel Nissan in Iowa City, IA, also serving Cedar Rapids, IA and Coralville, IA is proud to be an automotive leader in our area.

We specialize in auto services, repair and body work. We also work on domestic and imported cars.

http://mobileautotruckrepairiowacity.org/ You cannot know when you might be left stranded far away f