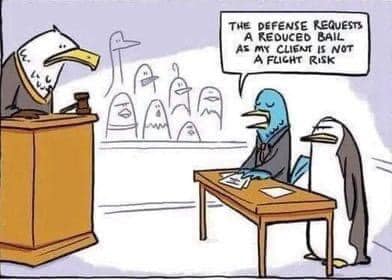 Law regarding an employer’s vaccine mandates.

The demand is for equal treatment under the law. If they won’t give it, then done be surprised that we seek to take it!

I just want to assure all my clients that I’m not a cat.

I just want to assure all my clients that I’m not a cat.

I do not recommend this method.

A central California couple who’d been victimized by robbers is accused of taking matters into their own hands by putting bicycles on their porch, laying in wait for would-be thieves, then pummeling them with baseball bats.

Neighbors said the pair began their vigilantism after they moved into their Fresno-area neighborhood and twice had their car broken into.

necn.com With the new decade upon us, police in Maine are advising people to write out the year 2020 when signing legal documents.

This is why I don’t talk over the phone ever! And advise everybody else never discuss sensitive issues over the telephone. PERIOD! 

Steve Raiser, of Raiser & Kenniff, PC, was featured on NBC, discussing the attorney-client privilege, and a violation that was uncovered when the Nassau Coun...

Evidence: Fox News is on Crack!!!

A member of the crack reporting team at Fox Business was busted with a drug pipe in his sock, authorities and sources said.

In the Case of People v. Harris: 13 count Bronx County indictment Charging Criminal Possession of loaded fi****ms and Ma*****na, defendant found Not Guilty of all charges after trial.

That had better have been one hell of a hotdog?

... but one cop repeatedly said no — and allegedly slapped the BBQ treat from her.

Terrible Ruling: The Castle Doctrine applies in Your own home. This is admittedly NOT HER HOME!
Absurd ruling.

dfw.cbslocal.com A number of developments Monday morning as the Amber Guyger trial in Dallas entered its 7th day.

I’ve been involved in a couple of these cases. It would have been better to have said nothing at all then to have said that. School districts and law enforcement take these things very seriously, it’s a zero tolerance issue.

A father chased after a car thief who stole a vehicle with his children inside and then beat the thief to death, with help from bystanders, Thursday night in Philadelphia, police say. - NBC10 Philadelphia

Paul Manafort to Be Sent to Rikers, Where He Will be Held in Isolation

nytimes.com Mr. Manafort was indicted on state charges, which prosecutors brought to ensure he would go to prison if pardoned by President Trump. High-profile inmates are often held in protective custody.

Trump: ‘I had nothing to do with Russia helping me to get elected’

This is why I advise people to remain silent! This buffoon just made an unwitting admission!

news.yahoo.com The president has long downplayed Russian interference in the 2016 election. But for the first time Thursday, Trump briefly admitted Moscow’s involvement aided in his victory.

Just because somebody is deranged, doesn’t mean they can’t feel remorse.

Mum who slept with friend's son, 14, cleared because she thought he was over 18

It may be a defense in England, but not here in NY.

So, we have a novel theory in defense of a child neglect: Can you neglect a child, if that child’s conduct preceding the neglect would have been sufficient to constitute constructive emancipation?

This is a trial. Maybe make some new law here!

Defending the accused person’s right to fair treatment under the law.

I support and approve of this sentence!

This is why I don’t discuss anything over the phone! EVER!!!!

kcur.org A former federal prosecutor listened to multiple recorded calls between an inmate at Leavenworth Detention Center and her attorneys, documents disclosed at

Rated 5/5 by Martindale-Hubble! Licensed to practice in New York, New Jersey and the Federal courts. Over 35 years of legal experience in a variety of legal fields. Experienced trial attorneys, take me to court now!

You can rely on Goldstein, Rubinton, Goldstein & DiFazio, PC to serve and coordinate your legal needs from simple to complex issues.

Our law firm has been zealously serving the legal needs of our clients since 1991. Whether you have been SERIOUSLY INJURED in an accident, ARRESTED, or buying your FIRST HOUSE we are dedicated to represent your interests and protect your rights.

James Pascarella is a Suffolk County Criminal Defense Attorney who has the experience, reputation and bedside manner you need to handle your criminal case.