Open by appointment only. Please call 319-351-5738 at least two business days in advance to schedule a tour. In 1876, the Ezekiel Clark family donated land to the town of Coralville for a school.

The two-story brick building boasts native limestone foundation and cast iron star clamps. Classes were originally held on the first floor, with the second floor being used as the gymnasium and auditorium. As the population increased, both floors were used as classrooms. The schoolhouse ceased all classroom operations in 1951. Today, the Johnson County Historical Society offers tours of the 1876 C

oralville Schoolhouse. Visitors get to experience the life of a Johnson County student during the 1870s by trying their hand at penmanship, playing old-fashioned games, and ringing the school bell.

First week of summer camp is under way! 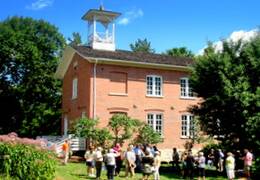 The ICM Volunteer Guild is a group of energetic, creative, and committed volunteers dedicated to the advancement and growth of The Iowa Children's Museum.