The mission of the George Bush Presidential Library and Museum at Texas A&M University is to preserve and make available the records and artifacts of George H.W. We promote civic literacy and increased historical understanding of our national experience, and foster a community of public service and volunteerism. We accomplish this mission by offering rich educational and public programs, original museum exhibits and access to our archival holdings.

In the first photo, Vice President Bush takes the Oath of Office and becomes the 41st President of the United States. Wife Barbara holds two Bibles: one used by George Washington during his first inauguration in 1789. This Bible was lent by St. John's Lodge No. 1 of the Free and Accepted Masons of New York City. The other Bible was a gift to the President-Elect from the House and Senate Prayer Group. Each of the Bibles was open to the Beatitudes. Later in the day, President and First Lady Bush dance at one of the Inaugural Balls, Washington, DC.
20 January 1989
📷 Credit: George Bush Presidential Library and Museum 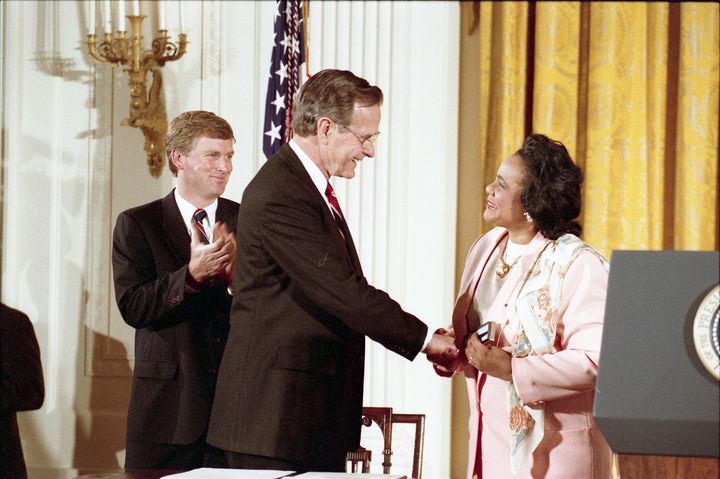 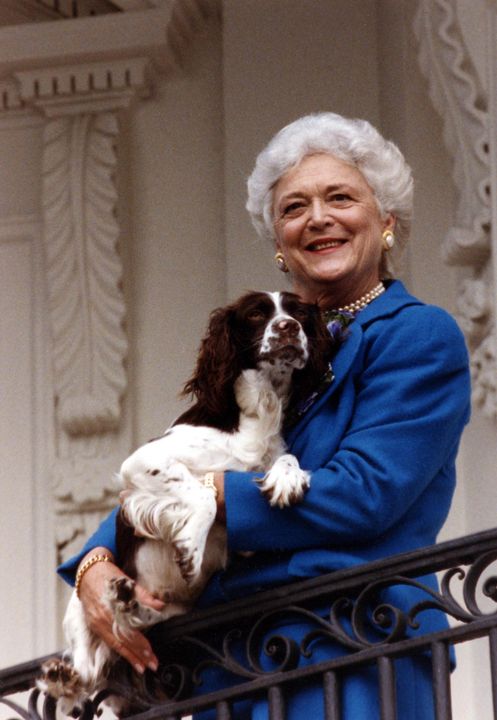 It's National Law Enforcement Appreciation day! Thank you to all the selfless men and women who serve and protect us daily!

Happy Anniversary to George and Barbara Bush! The couple was first married on January 6, 1945. The couple celebrated 73 years of marriage together and were the 2nd longest-married presidential couple in U.S. history.

On Jan 6, 1945, Barbara Pierce and George H.W. Bush were married at the First Presbyterian Church in Rye, NY. Their love story lived on for 73 happy years. 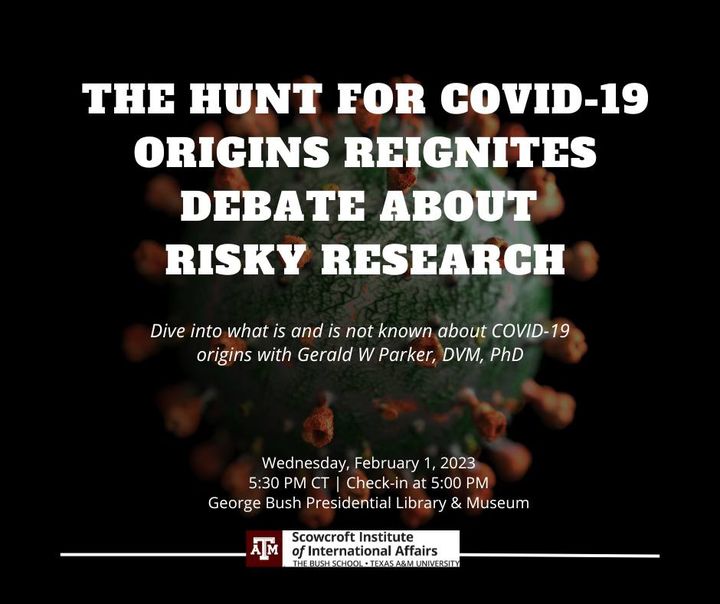 Gerald W Parker, DVM, PhD will provide opening remarks and allow ample opportunity for questions to highlight what is known and not known about COVID-19 origins and provide insights into the debate about controversial risky research that began over a decade ago.

The museum store will be closed on Wednesday, January 4. We apologize for any inconvenience. However, the museum will be open during regular hours. 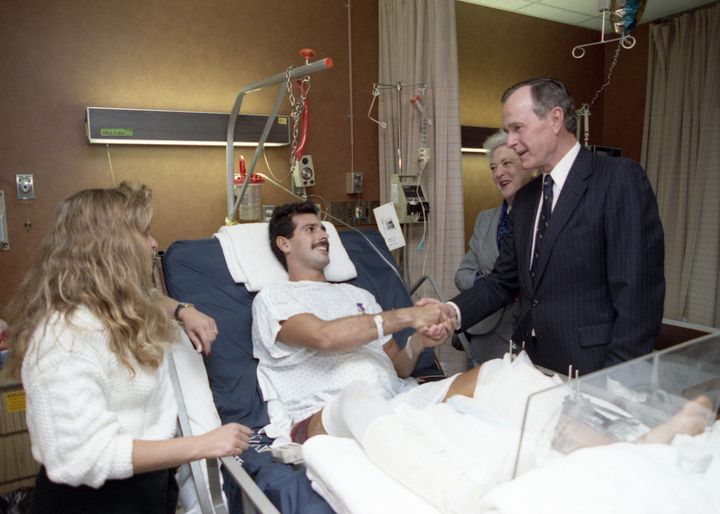 Merry Christmas from the George Bush Library! We hope you have the happiest of holidays! 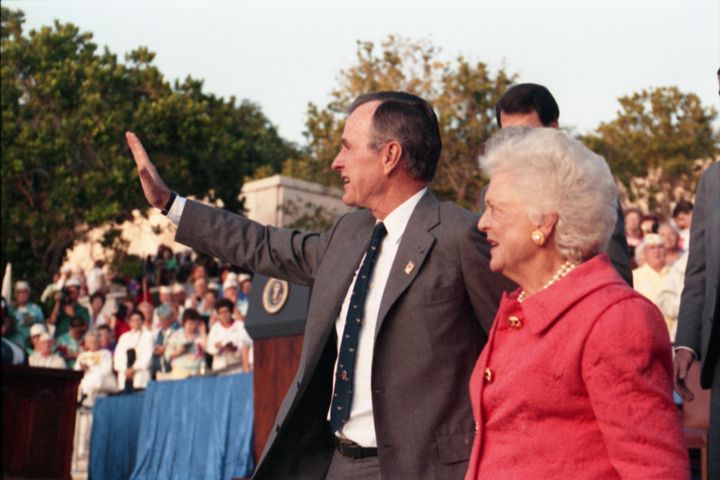 President and Mrs. Bush wave to the crowd at the National Memorial Cemetery of the Pacific following President Bush's speech commemorating the 50th anniversary of the Japanese attack on Pearl Harbor.
07 December 199
📷 Credit: George Bush Presidential Library and Museum 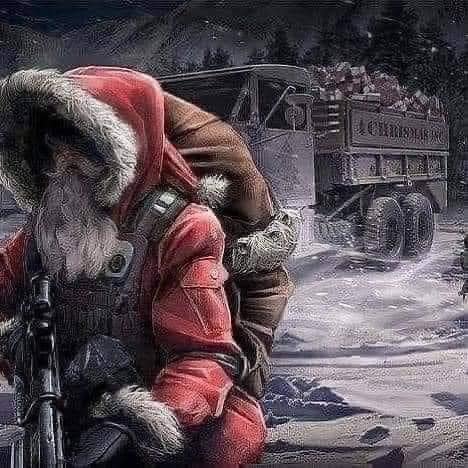 MGySgt. Claus, known to use the alias “Saint Nicholas”, “Kris Kringle”, “Father Christmas”, or simply “Santa”, is a reserve Marine with 1,743 years of service.

He specializes as a tactical operator of the next generation DEC-25B, Cargo Airborne Delivery (CAnDY) Carrier.

It has also been retrofitted with eight high-powered, air-cooled Rangifer Tarandus carrot-fed generators.

As a single seat cargo delivery platform, it is capable of vertical delivery of high-value items, take-off and landing without pilot controlled lighting (PCL).

PFC Rudolph is also authorized to report for duty; however, he must first successfully complete his Phase II SERE Training, which he has failed three times due to a medical condition related to his nose.

Although the above Marines are on orders for only 24 hours, it is anticipated that they will submit a travel claim for 24,901 miles at .56/mile, using a POV. Suitable Government transportation is not available.

As a special operations unit, each member is granted a high level of uniform flexibility, as well as relaxed grooming standards.

Per diem has been modified to include large quantities of hot cocoa and cookies.

Government travel card use has been authorized.

Pictured here President and Mrs. Bush visit Pearl Harbor Naval Base for ceremonies commemorating the 50th anniversary of the Japanese attack on Pearl Harbor to honor those who both lost their lives and those who fight to protect them.
07 December 1991
📷Credit: George Bush Presidential Library and Museum

December 7th, 1941 "A date which will live in infamy" - FDR
Today we pay tribute to those who perished in the attack on Pearl Harbor 81 years ago today and salute those who have valiantly answered the call to serve to defend our freedom since.

A big thank you to Jean Becker for writing an article about President Bush's account of the impact that Pearl Harbor had on him, his decision to serve during WWII and particularly his ChiChi Jima experience for "Pearl Harbor Day of Remembrance", beginning on pg. 66:
https://my.mtr.cool/hxyfwjqtxg

As we commemorate the anniversary of the attack on Pearl Harbor, the National Archives is honored to care for and share photographs, video footage, and military records that provide eyewitness accounts surrounding December 7, 1941. Learn more on our Special Topics Page:
http://ow.ly/WS2n50LWN39 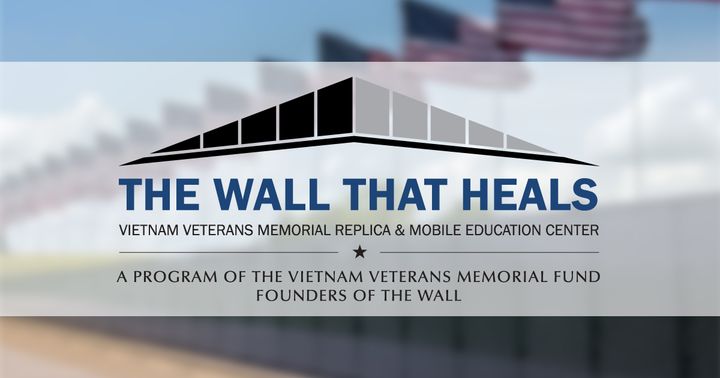 The Wall That Heals, a three-quarter scale replica of the Vietnam Veterans Memorial with a mobile Education Center, is coming to Veterans Parks & Athletic Complex from April 27-30, 2023.

The display will be open 24 hours a day and is free to the public.

🎖️ The Wall That Heals honors the more than 3 million Americans who served in the U.S. Armed forces in the Vietnam War, and it bears the names of the 58,281 men and women who made the ultimate sacrifice.

President Bush arrives at the USS Forrestal off the Coast of Malta.
01 December 1989
📷Credit: George Bush Presidential Library and Museum

Bush Library director retiring from career in archives Warren Finch is embarking on his final days as director of the George H.W. Bush Presidential Library & Museum before he retires on Saturday.

On the fourth anniversary of his death, President Bush is fondly remembered for his lifetime achievements and commitment to service.

This Thursday is our next Business After Hours at the George Bush Presidential Library & Museum! This is a great opportunity to meet other businesses around the Brazos Valley!

Today we pause to remember the life of President George H.W. Bush.

Longtime Director of Bush Library Retires - WTAW | 1620AM & 94.5FM The longtime director of the George H.W. Bush Presidential Library and Museum is retiring. Warren Finch was detailed to the Bush White House in 1992 to help move materials to Texas and has been in [Read More...] 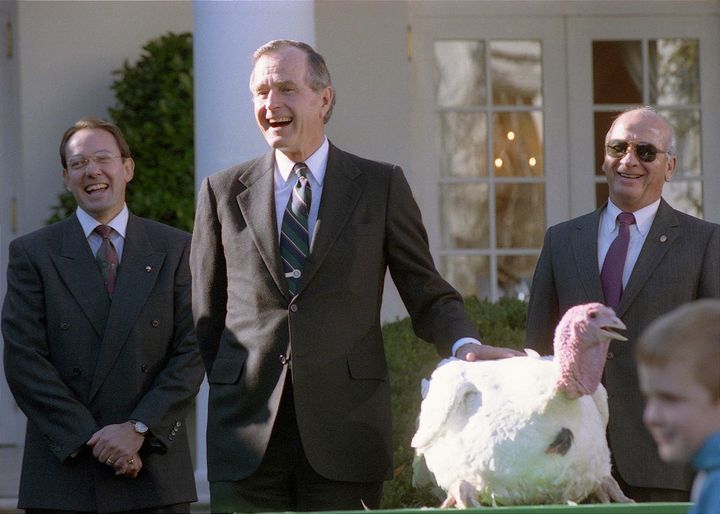 Happy Thanksgiving! President Bush participates in the presentation and pardoning of the National Thanksgiving Turkey in the Rose Garden of the White House. His grandson, Sam Leblond, pets the turkey during the ceremony. 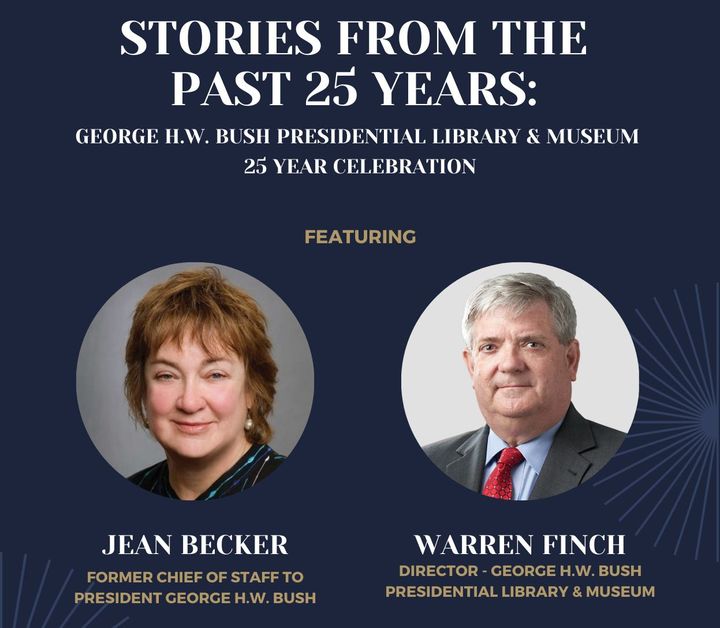 The 25th Anniversary Silver Celebration that was scheduled to take place Friday, November 18, has been postponed. We thank you for the interest and support for the event and will be sure to get the information out to the community once the event has been rescheduled. Although the evening event will not go on as planned, the museum will be open for free from 9:30 a.m. to 5 p.m., and we invite everyone to tour the museum, including Mandela: The Official Exhibition.

The Corps of Cadets develops well-educated leaders of character who are academically successful, emb

Tutorjohn is an amazing tutoring company! We teach students in one on one and in group tutoring. Our

For Your Special Occasion

The Texas Plant Disease Diagnostic Laboratory (TPDDL) aka the TX Plant Clinic provides plant health diagnostic and educational support to people in the state of Texas and beyond.