Award winning Janis Productions specializes in Wedding and Event Videography, Bar/Bat Mitzvahs, Video Biographies, and Photo Montages. Janis Productions is currently serving the greater Pennsylvania, New Jersey, Delaware and New York areas along with many other states in the Northeast.

Janis Productions is pleased to announce that we are installing a interview-sized green screen studio that is capable of handling 2 subjects waist high.

Consulting for a production company.

Janis continues its work on a video for the Jerry Segal Classic which is raising funds for Magee Rehabilitation Hospital. Many people have been interviewed over several weeks. The crew used a teleprompter during this particular commentary from Mr. Segal. 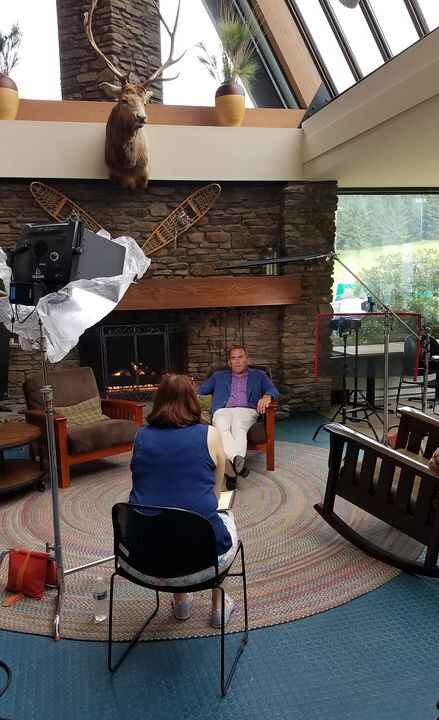 We recently used a Quick Ball Lantern Softbox (aka "Chinese Lantern") to light groups of 4-8 people being interviewed for a video tribute. Amazing results.

The young ladies from "The Mount" graduated this morning. "We have fulfilled the dreams of Sisters of St. Joseph."

The Janis crew filmed a promotional video for Rosemont College in Bryn Mawr today. John Bell directed a sound and multi-camera crew as they documented the Baccalaureate Mass and Commencement on the historic campus grounds and chapel.

The Janis crew covered the Sandy Sprint Superhero 5K or 10K Walk/Run & Canine Sprint today. Rocky was there to cheer on the participants at the Philadelphia Art Museum. A great turnout for a great cause.

Another successful shoot in Albany!

John Bell and his PA, Ben Hill, on their way to Albany for a 3 day shoot. More pictures to follow!

Who do you hire when you want your audio/visual program with a huge professional group to run flawlessly? You hire Janis Digital Media. Our client said, "We knew Janis would get the job done right!"

We've known and worked with Susan Beard for many years. She's a lovely person and fabulous photographer. Tonight, she was a guest at an event we filmed. She kept the party hopping!

Janis crew is in the Lycoming Valley working on an industrial shoot.

Jamming to some great music while filming a promotional music video for The Vincent James Band. Wow!

A fun job for Janis today. A realtor hired us to shoot a barbecue that he hosted for his clients. We filmed a greeting for his website and a few testimonials from satisfied customers. Plenty of food, sports... and paint!

Filming in the Poconos for a favorite client, Golden Slipper Camp. The crew included: John Bell, producer; Adam Smith, cinematographer/drone pilot and interviews that were conducted by Meagan Hill. Had a great time with all the kids and staffers.

A lovely venue to honor a special guest of honor. Cheers!

Interview with Philadelphia Mayor Jim Kenney for Neil and Fred Stein of the Creative Group. And, no, we did *not* talk about the Eagles!

Janis Digital Media spent a weekend in Albany filming a regional competition for the Sweet Adelines. A lot of equipment. A lot of work. A lot of fun.

Rocky at the Sandy Sprint Run

The Janis crew covered a July 4th corporate event. The Philadelphia fireworks display looked like a wash out. Then, the skies cleared out... dramatically.

Busy week at Janis Productions. Filmed 2 different performances of the amazing Michelle Wiley for her upcoming promotional video. Janis also covered the "Walk a Mile in Her Shoes" fundraiser for Laurel House.

Janis Crews in both Albany and Philadelphia this past weekend! John Bell worked for the Sweet Adelines in Albany, while Sharon Bell produced (*AND* won FIRST PLACE in her division!) the Sandy Sprint Run in Philadelphia. Philadelphia's Rocky Impersonator-John Monforto cheered on the participants.

John Bell chats with a Temple senior at the Temple University School of Media and Communication's Internship and Career Fair.

Shot a promotional video today for a local non-profit which provides support services for abused women.

Blooms and Buds Flowers and Gifts. Beautiful flowers and gifts for all occasions. Call or come in t

We are a small business that specializes in custom orders. We provide both baked goods (homemade of course!) and floral arrangements. We also provide flowers for large events such as weddings. Our ...http://wannabiz.biz/sweetcustomd/about