Hello! Three auto repair shops in your closest area have been already added to the mobile application’s catalog. It helps users to locate the best shops in Belvidere. For some reason your shop is still not in the list. Please note: you have the last chance to get you FREE account at https://apps.facebook.com/repairshopscatalogqa/?register_code=10333273

Auto body repair shop. Established in 1964 by Gerald J.Hyser. In 1974 he moved into his newly built shop at its current address. In the early years, Gerald took care of the repairs and his wife, Loretta, handled the paperwork.

Gerald and Loretta's children followed in their parents' footsteps. In 1991, their son Scott B. Hyser took ownership of the shop. Hyser's Body Shop specializes in quality collision repair for autos and trucks. We are not concerned about the quantity of autos we fix. Instead we care that each repair is done to the highest of standards. Scott and his brother, Mark work on collision repairs at the shop, while their sister, Chris manages the office. 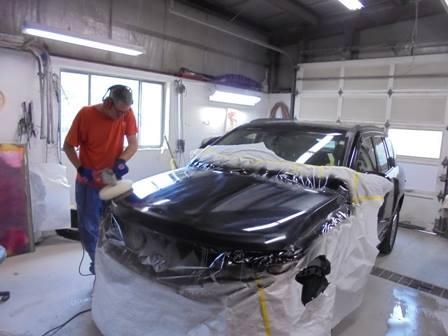 We have our Paintless Dent Repair (PDR) techs busy after our recent hail storms in our area. Need any repairs from hail on your vehicle? We can help by working with your insurance company directly. PDR can also be sued to remove dings and dents, as well as body creases and hail damage as long as the paint surfaces is intact. Contact us to find out if Paintless Dent Repair is the right choice for you.

Our new street and curbs in front of the shop

New street paved, new sidewalks, yard landscaped, but two of our tress had to be removed. Renovation.

Enjoying the good food at the shop Christmas Party 2012.

Other Automotive repair in Belvidere (show all)

We provide the best service in auto repair at better prices. Family owned and operated. Your locally owned specialty shop for powersports fabrication & repair. If it has a engine, we can make it run better! Full service auto repair and maintenance in Belvidere for all European, Asian and domestic cars, trucks and SUVs. Hopperstad Customs has been serving the Custom Car/Hot Rod community since 1968. No matter what type Welcome to our business page! Humphreys Cleaning is ran by Trisha Humphreys and Shelly Villarreal. Kunes Auto Group is now proud to be a part of the Belvidere community. Offering new Cadillacs and GMCs, and a large selection of pre-owned vehicles.