How to improve the smart phone performance.
DO: Delete all unnecessary apps, media, and content

Smartphones are just like any other computer. While flash drives don’t work like today’s typical hard drives, they still do slow down when you have more data on them. The easiest way to improve smartphone performance for your Android device is to get rid of all unnecessary material. Not only will doing so speed up the phone itself, but it’ll also speed up your workflow. Instead of having 50 to 60 apps to sort through, just keeping the bare essentials and getting rid of everything else will speed up your usage.

While we all want the latest and greatest software and features, they typically slow down devices. This issue isn’t exclusive to smartphones; the recently released OS X Yosemite beta brought a noticeable lag to some MacBooks in addition to the new features.

With Android, you may not even be given the option of whether you want to update software to a new version or not. But if and when you do, take heed: making a significant upgrade (like from 4.3 to 4.4) will always slow down the phone. The bigger the software update, the slower the phone is likely to become. Wait and see if anyone else who has same phone and has completed the update runs into issues before jumping on board yourself.

The Don'ts of Buying a Mobile or Smartphone

Along with all the things that are to do when making a mobile communications purchase, here are a few things not to do.


Don't just buy a phone on looks alone. It might have a nice big screen and a metallic pink case, but that's no good if it takes half an hour to send a text message because it's been dropped. Check out as much as possible about the phone before buying.


Don't get carried away getting a phone that's all-singing and all-dancing if all that is required is calls and texts. Similarly, don't skimp on price if one of the requirements is fast Internet access or a decent camera. Don't buy without checking the exact specs of the phone.


Don't impulse buy – check reviews of the phone before committing to it. Don't purchase without research.

Smartphones are, in essence, mobile phones with some computing ability. The first smartphones came about as a cross between a mobile phone and a PDA (personal digital assistant – for example, a PalmPilot). Later, internet browsers, MP3 players, cameras, and GPS devices were integrated to form one multi-tasking unit that removes the need to carry multiple devices around. Smartphones were first marketed in 2000 by Ericsson, using the Symbian platform. Other mobile platforms include Apple iOS, Windows, Blackberry, and Android. Several manufacturers are attached to a certain platform (e.g. Nokia produces Windows phones) and all Apple products are unique to Apple. Applications, or apps for short, can be downloaded onto most smartphones. Apps can be games, for banking, for popular websites such as social networking, or for music. They are often a convenient way of accessing something on the Web without having to visit a site. Smartphones are rapidly taking over the mobile phone market. They often have a QWERTY keyboard or a large touch screen rather than a numbered keypad, making it easier to send messages and take photos. It is rare nowadays to find someone who only really wants a basic phone – why have a separate camera, phone, and diary when they can but put together in a smartphone? 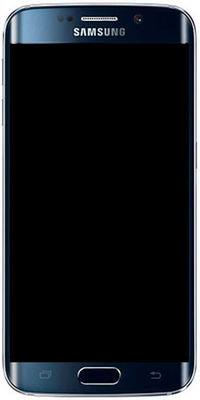 Samsung Galaxy S6 Edge smartphone was launched in March 2015. The phone comes with a 5.10-inch touchscreen display with a resolution of 1440 pixels by 2560 pixels at a PPI of 577 pixels per inch.

The Samsung Galaxy S6 Edge is a single SIM (GSM) smartphone that accepts a Nano-SIM. Connectivity options include Wi-Fi, GPS, Bluetooth, NFC, 4G (with support for Band 40 used by some LTE networks in India). Sensors on the phone include Proximity sensor, Ambient light sensor, Accelerometer, and Gyroscope.

Avoid buying re-furbished phones or what we call high copy phones from Chinese.
check the IMEI--*#06#- make sure the imei is the same as that **behind your phone when you remove your battery.
make sure you check if there is a triangle shape in yellow behind the phone after removing your battery.--refurbished.
call for more updates.
Authentic info.

How to sync contact to your gmail account.
Go to settings
-Accounts
-google account- set up one if you dont have.
-open google account and click contact or tick the option for syncing.
-give it about 3 minutes and contacts syncronised.
to confirm check your contacts and those sync will be with a google blue sign.
congs you can now transfer your contacts to any smart phone with out nashing

contact us for the best deals of phones on board.
samsung phones ranging from 200,000shs and above contact us.

in-case of any recommendations or information on the phones you want to buy we are ready to assist you, you have forgotten your pattern you can also contact us we can do it remotely.

if you are to buy a smart phone any where around down town please check the following first.
--make sure that the imei number (*#06#) matches the one at he back of the phone when u remove the battery.
--when there is a yellow patch triangle form behind where the battery sits, then the phone is refurbished, re think or
re-negotiate for a lower price or close the deal.

void charging your phone for long hours and if you are to charge the battery should be at-least below 10%.in case you charge it for long hours it weakens and is used up easily.

To verify original Samsung-s free tips
*#0*#-sensors then tap it shld light green
*#9090# if it doesn't bring any thing then it's dupe run.
*#03#-may work or not rare cases
Check imei *#0# it should be the same as the one behind the phone when you remove the battery.
When u see a yellow patch behind the phone after removing battery phone is refurbished.
Call for more info please follow and like page for more info

For those who don't have time to go to town to buy a phone or whobwant assistance in selecting a good original phone, well we offer convenience support we buy it for you and we deliver on your doorstep.
Mobile app and site will be up soon.

Ever gone to town to buy a new smartphone after hitting a jackpot,but you don't know how to identify an original phone,so u end up trusting the sellers recommendation when u reach home its a dupe,fake China phone uhmm annoying I know we'll this page will help you identify codes to test smartphones and give you recommendations when u need them if you need physical help at the shop then that will mean payment but you will go hoke with an original phone worth your money.the time has come to stop buying fake phones on market.

Avoid downloading apps from untrusted sources or from sites that tell you to download some apps as they will be spoofing and phishing your phone afterwards your phone will soon begin restarting itself,well that will be a virus which needs a hardreset or restoring firmware version of the phone.

Morning everyone thanks all the likes on this page
Tip of the day..
If you have forgotten your pattern after many attempts it's locked well this might be of help.
If its a Samsung-s series shut down the 📱 then press the power button and volume down keys at the same time for 3 seconds and wipe factory data reset.your phone will be reset and the pattern will be no more,but u will loose data make sure u back up before hard reseting.incase of more information you can call us for help.

Tip of the day to all users of smart phones avoid putting your phones in hoofers as it will be shocked and you will have to bear the burden of replacing the mother board. it has been confirmed that an electric shock passes through the one way pin of the hoofers and shocks the mother board of your phone.

with this weeks review on the best smart phones.
Samsung galaxy s6 vs iPhone 6
after research done by our great bloggers it was determined that Samsung galaxy s6 is the best compared to iPhone 6 in terms of functions and likes by our customers.

Other Mobile Phone Shops in Kampala (show all)

we sell uk used phones at a good price

We deal in all phone types, Accessories & smart gadgets