The Uganda Parliamentary Forum on Social Protection
Parliament of uganda

Hon. Justice Benjamin I Kabiito, the Chairperson JSC communicated that the appointments were the largest number of judicial officers ever appointed by the Commission in one go.

The appointments were;
The Commission regrets to announce the death of one of their staff as below.
Happy 59th Independence day celebrations Uganda
His Worship Okumu Jude Muwone and His Worship Robert Mukanza yesterday on 7th October, were appointed Chief Magistrates by the Commission in their sitting.
They were both Grade 1 Magistrates.
Presiding over the swearing in ceremony is Chief Justice Alfonse Owiny-Dollo.
This afternoon at High Court, we’ve witnessed the swearing in of Mr. Jimmy Okello as Member of the Commission representing the Public.
His Excellency President Museveni also appointed three Registrars;
HW Flavia Nabakooza, HW Kaitesi Kisakye Mary and HW Bareebe Rosemary.
President of Uganda His Excellency Yoweri Kaguta Museveni appointed new Justices of Appeal and Judges of the High Court.

Happy New Year from us to you 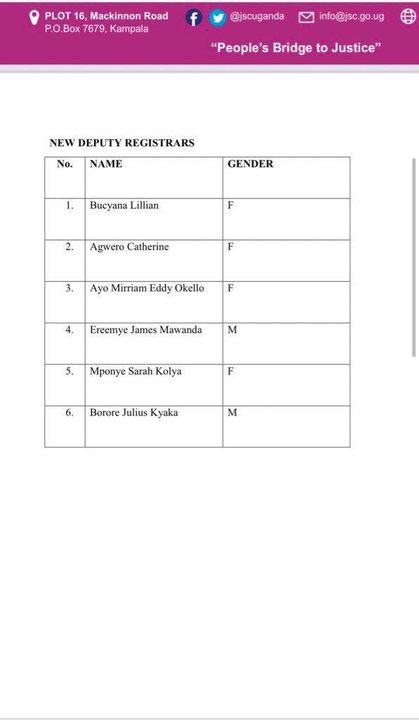 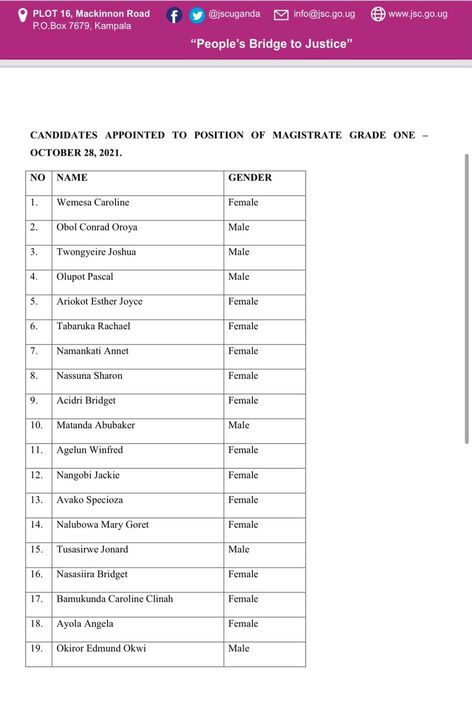 To improve access to Justice for people and reduce litigation, JSC has appointed 47 people to the office of Grade one Magistrate. They include 17 Males and 30 Female.

Hon. Justice Benjamin I Kabiito, the Chairperson JSC communicated that the appointments were the largest number of judicial officers ever appointed by the Commission in one go.

The Commission regrets to announce the death of one of their staff as below.

His Worship Okumu Jude Muwone and His Worship Robert Mukanza yesterday on 7th October, were appointed Chief Magistrates by the Commission in their sitting.
They were both Grade 1 Magistrates.

Presiding over the swearing in ceremony is Chief Justice Alfonse Owiny-Dollo.

This afternoon at High Court, we’ve witnessed the swearing in of Mr. Jimmy Okello as Member of the Commission representing the Public.

President of Uganda His Excellency Yoweri Kaguta Museveni appointed new Justices of Appeal and Judges of the High Court.

JSC has appointed 11 more people to the office of Registrars and Magistrates in the Judiciary.

We would like to congratulate you Dr. Rose
Nassali Lukwago on your reappointment as Permanent Secretary/ Secretary Judicial Service Commission. Congratulations Doctor 👏🏿

What is required to do get Discretionary bail?
1. A substantial surety~ that’s a person of integrity, good repute, and standing.
2. Produce a National identity card
3. Must show that he/she resides in the areas where the court is located.

It is important to kite that the accused is presumed innocent until it is proved that he or she has been found guilty or he or she pleads guilty.

Bail is an agreement between the Court on one hand and the accused, as well as the sureties, on the other hand that the accused will be released from prison to attend his trial without being imprisoned. Often, a sum of money is lodged to guarantee the accused’s appearance in court.

There are two types of bail, discretionary bail, and mandatory bail.
The accused has the right to apply for bail in a court that has the powers to release him or her on bail.
In Magistrates Courts, after the charges have been read to the accused and he/she denied the charges, the accused, if not represented by a lawyer, the accused can raise his or her hand and ask the Magistrate to release them on bail.

In the High Court, bail applications are made in writing unlike in Magistrates Courts. At bail hearing, a judicial officer evaluates the case and determines if the accused should be released on bail or not.
The terms upon which an accused is released on bail are determined by the court depending on a number of circumstances.
There is no list stating an amount of bail money that will be requested for a particular offense charged;
Sureties are people who guarantee that the accused person will attend his or her trail and be in court on time on the day of their trial;
The accused is released from prison and handed over to the sureties.
The release of an accused on bail does not mean he has been freed from the charges against him.

We’ve talked about human rights, but do you know your Duties and responsibilities as a Ugandan citizen? Good morning, let’s share about this today.
Generally, anyone in Uganda is entitled to enjoy the basic right and freedoms under the law however, citizens and residents may have more rights, privileges, and obligations
Ugandan citizenship is mainly acquired through birth.
There are however other ways by which citizenship may be acquired, such as through registration or naturalization.
Ugandans may acquire citizenship of another country without losing Ugandan nationality, while nationals of other countries are also allowed to become Ugandan citizens and keep their other Nationality.
Commonly known as dual citizenship.
The Constitution of Uganda says that citizens have the duties and responsibilities to;
1. Be nationalistic and loyal to Uganda and to promote its well being,
2. Engage in gainful work for the good of the citizen, family and the common good,
3. Contribute to national development
4. Contribute to the well-being of the community
5. Promote Responsible parenthood
6. Foster national Unity and live in harmony with others
7. Promote democracy & rule of law
8. Know the provisions of the Constitution
9. Respect the National anthem, flag, court of arms & currency
10. Respect the rights and freedoms of others
11. Protect children and vulnerable persons against any form of abuse, harassment or ill-treatment
11. Uphold and defend the Constitution and the the law
12. Protect and preserve public property
13. Pay taxes
14. Defend Uganda and render national service when necessary
15. Register for electoral and other lawful purposes
16. Cooperate with lawful agencies in the maintenance of law and order
17. Create and protect a clean environment
18. Fight corruption and misuse or wastage of public property citizenship.

Here are some Tips on Hiring a Lawyer;

There are several people that you’re likely to meet when you are going through a court process. Today we try and explain who they are and what they do in the administration of Justice.

Judge or Magistrate or Registrar;
These are court officials responsible for managing the case in court. They listen to all people who attend court to give evidence including police, victims, suspects, probation officials, lawyers, witnesses and make the final decision as to whether someone is guilty or lot or in a civil case whether a wrong was committed.

Court clerk;
The court Clerk maintains the official court record of your case. S/he usually sits next to the Judge/Magistrate. The Court Clerk also receives all court records and assigns hearing dates. S/he also acts as an interpreter for the court.

Defense Lawyer or Advocate or Attorney;
This lawyer represents the suspect or accused person. His or her job is to represent the accused person’s legal interests. If the suspect is found guilty, the defense lawyer will try to negotiate a favorable sentence.
Witnesses;
A person with information that would help the court to arrive at the right decision is commonly known as a witness. Witnesses should only testify to what they saw and heard but not what they were told.

Human Rights Law is an area of law that concerns important rights that we own as human beings.

Human Rights Law protects people against abuse by those who are more powerful. In the majority cases, these powerful individuals will be persons associated with Government such as the Police, and Army.
Human rights can only be taken away in specific circumstances. Examples of human rights include freedom from torture, the right to own your things, and freedom of expression or speech.
The main human rights are contained in Chapter Four of the Constitution of Uganda.
These include;
a) Equality and freedom from discrimination.
b) Protection of right to life.
c) Protection of right to personal liberty.
d) Protection from torture or cruel, inhuman or shameful treatment or punishment.
e) Protection from slavery, servitude and forced labor.
f) Protection from deprivation(removal) of property.
g) Right to privacy of person, home and other property.
h) Right to a fair hearing.
i) Protection of freedom of conscience, expression, movement, religion, assembly & association.
j) Right to Education
k) Rights of the family e.g the right of a man and woman to marry and found a family.
l) Affirmation action in favor or marginalized groups.
m) Rights of Women.
n) Rights of Children.
o) Rights of persons with disability.
p) Protection of rights of minorities.
q) Right to Culture and Similar rights
r) Civic rights and activity.
s) Right to clean and healthy environment.
t) Economic rights e.g the right to work under safe and healthy conditions, the right to practice one’s profession, the right to join a trade Union and the right to maternity leave.
u) Right of access to information.
v) Right to just and fair treatment in administrative decisions.

May the guidance of blessings Allah be with you.
#EidUlFitr
#eidmubarak

Do you know the difference between Criminal Law and Civil Law? There are a number of differences and these include;
1. The Nature of the proceedings, the language or terms used, the remedies or solutions given are generally different. For instance, Criminal cases are usually started by and in the name of the State on behalf of the wronged party. That is why in a criminal case you get the charge sheet reading like this; Uganda Vs Kitunzi

One or the aims of criminal law is to punish the wrongdoer while civil law aims at determining rights and giving a remedy to a party whose rights have been interfered with by wrongful acts of another.

In criminal proceedings, the one to prove a criminal case against the accused is the State and this must be done beyond a very high standard of evidence being provided (beyond reasonable doubt). In criminal cases, the State proves their case through a prosecution lawyer.

In Civil cases, it is the duty of the plaintiff to prove the case against the defendant. However, the Plaintiff only has to show that the defendant most likely than not, committed the acts complained of.

Most crimes are defined by a law called the Penal code Act. For instance, assault, theft, forgery, defilement, rape, murder and treason are some of the offenses that are stipulated in the Penal code Act.
There are many other Acts of Parliament and other written laws that create offenses. For example, the Anti-Corruption Act creates offenses related to corrupt conduct such as giving or receiving bribes.

The traffic and Road Safety Act creates traffic offenses such as reckless driving, drunken driving, driving a motor vehicle without a valid driving license among others.

There are also bye-laws made by bodies such as Local Governments, which create offenses. For example, Kampala City Council bye-laws forbid letting animals loiter/wander in the city.


Other Government Organizations in Kampala (show all)

Official page of the Russian Federation Embassy in Uganda - Kampala

To ensure the population access quality, safe and efficacious human and veterinary medicines and other healthcare products through their regulation.

Welcome to the page of the Ministry of Foreign Affairs of the Republic of Uganda. You can f

Официальная страница Посольства России в Республике Уганда. The official account of the Russian Embassy in the Republic of Uganda

Vision: United and Efficient LGs in Uganda Mission:To unite all LGs and build their capacity for efficient and effective services to the population.