Always a pleasure to see these samlor drivers riding around Chiang Mai. And don't be fooled by their age because they are as tough as teak 👊 It's an old-fashioned style of transport, but one which I hope never dies. Hats off to the Rotary Club and tour companies like Chiang Mai on Three Wheels who are helping to preserve these old traditions (Y). Have you ever ridden in a samlor?
Good morning Frans and all. Here a beautiful Sam Lor in Nan!

n in the future and wants to improve the livelihood of the drivers by offering some great Chiang Mai Tours by samlor.

Yesterday I made a tour by samlor in Lamphun, something I wanted to do for a long time. Lamphun is the perfect place for a samlor tour because there is not much traffic. There are about 30 samlors still on the streets of Lamphun. Most of them are parked at the hospital but I found five of them at the Nong Dok market, the ‘Kad Luang of Lamphun’.
There I met driver Annej. He is 69 years old and has been riding his samlor since he was 20. He told me that there were at least 300 samlors in Lamphun when he started almost 50 years ago. He took me on a ride along the old moat to Wat Hariphunchai and back to the market. We had a great time. If you visit Lamphun, please make a trip by samlor. You will enjoy it and support the drivers. They deserve support. Contact us for a customized tour.

Samlors are still on the streets of Nonthaburi. I have heard that their license will not be renewed. That really is a pity. This is a short, beautiful film of Bangkok in 1953. Focus is on the streetcar and temples but there is plenty of great footage of samlors in the first few minutes.

Samlors (cyclos) in Hanoi are having lots of business from tourists. Let's hope we can achieve that in the future in Chiang Mai as well.

Images of our Samlor food tour for travel agents from Australia! Thanks Wide Eyed Tours!

Start of the samlor tour of USAC students last weekend Honoring Lung Nan Narin. Chiang Mai’s oldest samlor driver passed away on June 14. Lung Nan Narin was 100 years and 5 months old. He rode the samlor since World War Two. I met him three years ago at the monthly samlor meeting at Wat Upakud. I made a couple of pictures of him. Today I went to Wat Don Chai in Pa Daed to pay respect. What an amazing man. A real legend.

Fantastic new samlors in the folklore museum in Pattani

Unique signage in Pattani, close to the Tetwiwat Market.

Pictures of the combined samlor and bicycle history and culture today with students from USAC, United States Abroad Consortium. It was a great trip. Pictures were made by Naruemon Nai.

Our new food tour! Taste mouthwatering dishes, snacks and sweets, learn about their history and meet the people who make or sell them. Support the samlors of Chiang Mai!

Very nice blog about our tour and our samlor drivers.

Samlor Tour, Chiang Mai | Gabriella Manchester | Travel, Fashion and Lifestyle Blog In Thailand, everywhere you go you’ll hear ‘Tuk Tuk’ tweeted at you as you walk by. Yes they’re fun every now and then, and of course get you where you’re heading as quickly as possible,… View Full Post

Another samlor ride this morning!

Pictures of the Samlor Markets tour of this morning. It was a great tour!

Pictures of the start of a temple tour with 34 samlors this morning. Today we had a total of 44 people doing samlor rides which is a record for us. Thanks to all the drivers, guides and staff.

Samlors in action in Denver, Colorado. Sabine Frijns sent me this picture! Great to see that there is a future for the samlor.

Before the ride today! Getting ready for the group picture.

Great samlor tour last week with Oliver and Roger Backhouse. Drivers Manit, Daeng and Udom took us to historical sites from the 19th and 20th century in Chiang Mai.

In UNESCO World Heritage site Hoi An the samlor really blends in with the old town. They are very popular with tourists.

Samlors in Hoi An, Vietnam. In Vietnam there are called "xe xích lô" or cyclo....In the UNESCO World Heritage site Hoi An they do tours.

A staggering 54% of all public transportation vehicles in San Carlos City, Negros Occidental, Philippines, are pedicabs or, as we know them, samlors. It was such a pleasure to see so many of these fine vehicles on the streets of San Carlos. 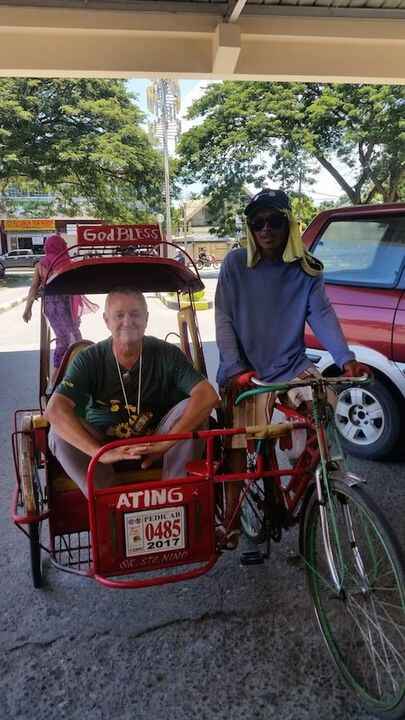 San Carlos City on Negros Occidental is a paradise for samlor aficionados. The city has about 1500 samlors plying the streets. They are also very pretty.

I found these pictures on different FB pages. They didn’t mention who made the picture but they were taken by the same person only seconds apart. Location is the intersection on Yaowarat Road, Bangkok, where the office of the Sri Sam Ang Company was located. The first picture was dated 1948, the other 1957…..the first picture was actually taken seconds after the second. Now I have to find out which year it was!

Welcome to Chiangmai Thailand..Land of Smiles :)