VOX packs everything that’s hot in Qatar and beyond into 80 pages of lifestyle, travel, fashion and fun and is available in both English and Arabic.

Published bi-monthly beginning December 2010, VOX is like nothing Qatar has seen before!

the editor of VOX magazine has a new page! Come & have a look!

Follow the traveling stylista as she travels the globe in search of the ultimate in chic. Kimberly Fisher Horan is an Australian Fashion Editor, Stylist, Writer & Entrepreneur. Founder of @sitaravintage @wild.fur @babesempowerbabes & @glowphilippines

the countdown is on! don't miss our FAST LANE issue out next week!

The 1st ever Vera Wang fashion show will be on April 23rd at the Pearl Qatar. Tickets go on sale this weekend at the store and any concierge at the Pearl. All the raised funds go to Rumailah Hospital. This is a women's only event! After party at Mango Tree!

Are you coming to the Doha Fashion Exchange this Thursday???? It's going to be a fabulous event!!!!! See you there!!!

Have you picked up your copy of VOX issue 2 yet???

twitter.com Twitter is without a doubt the best way to share and discover what is happening right now.

We had a great time spotting beautiful Party People at the Maze one year anniversary party last night! 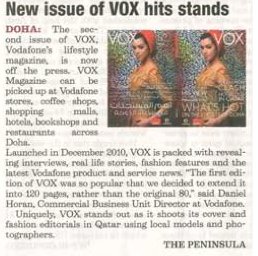 a sneak peek of the fabulous VOX issue 2 - pick up your copy today to see the whole 120 pages!

VOX issue 2 being released today!
First places to recieve copies - iWed at Convention Centre, ASD friendship festival & QPWN How Women Work conference at Katara. Will be in all Vodafone stores in the next couple of days

thanks to everyone who made the VOX launch party such a fun night & a special thanks to Jessica Gollnow who made it all happen! VOX rocks!

VOX has launched! Thanks to everyone for a great night!


Other Media/News Companies in Doha (show all)

Our aim is to exhibit ethical & innovative media culture that reflects the pure & unfiltered face of life in most professional,prudent & responsible manner

The Society of Professional Journalists in Qatar, Northwestern University in Qatar, Medill School of Journalism.

Creativity is MY Vision"- [email protected]

A Modern Magazine of our Times. A Special Production in 3D. http://q3dmagazine.com

ArtsQatar is the destination for information, reviews & features, on arts & cultural events in Doha & across Qatar. www.artsQatar.com