I am setting up my very modest 65mm telescope to view the Great Conjunction, but I have lost my box of eye pieces.
Can anyone lend me a selection of, or just one, eye piece (to fit 25mm diameter)?
Would be most grateful to the the Rings., and the Galilan Moons again.

(Not a member)
Are you guys still going please? Sooo sad to come home to Gizzy, wanting to take our kids up Kaiti hill and its over?? Any update??
Always hope for a clear sky when visitinvisiting Gisborne so w can go to your observatory
Taken tonight from The Hapara
I can join the RASNZ, or the AAS. Can I join the GAS?

Natalie Batalha - Life Beyond Earth Dr Natalie Batalha is an astrophysicist at NASA Ames Research Center and the Mission Scientist for NASA's Kepler Mission. This year she was named in Time magazine's annual list of the 100 most influential people on Earth. In 2011, Batalha was awarded a NASA Public Service Medal for communicating Kep...

National honour for long-time Gisborne astronomer PHOTOGRAPHING stars and tracking comets has long been a hobby of Gisborne...

Have your say: do you think the observatory is important for the Gisborne community?

-Tourism
-Eastern most observatory in the world
-Rocket Lab
-James Cook's first landing in Gisborne
-School kids missing out on seeing the stars
- ?

Tell us what you think – James Cook Observatory on top of Titirangi (Kaiti Hill) is currently closed due to earthquake risk. We’d like to redevelop this facility, but want to know what you think about the facility and how it should be used. Read more information on our website and tell us what you think, here’s the link http://bit.ly/2nldZRm

Keep an eye directly south (looking towards Mahia) probably best from hills like the top of Kaiti hill.

The cause of this is a massive solar storm from the sun 150 million kms away.

NASA astronaut Scott Kelly is 180 days into his year long mission in space to study the effects of long term space flight on the human body. Here is a beautiful moonlit picture of Italy he took just a few hours ago

Very very exciting news! Our little community could soon be seeing rockets being lunched into space 🚀

For the first time ever tomorrow humans in the International space station will consume food grown in space. This is a highly important step for our journey to Mars and beyond.

How to Reveal Subatomic Particles at Home | NOVA from ...

That is a pretty amazing experiment to try at home!

How to Reveal Subatomic Particles at Home | NOVA from ... Here's a way you can reveal subatomic particles that are shooting in front of your eyes all the time. NOVA Facebook: https://www.facebook.com/NOVAonline ...

Today is 46 years since we landed on the moon 🌛

At the request of the White House, I offer reflections on the attached image of our home, released today, July 20, 2015, forty-six years to the day after the first bootprints were left on the Moon.

Earth. Not mounted on a stand, with color-coded state and national boundaries, as schoolroom globes are prone to display. Instead, we see our world as only a cosmic perspective can provide: Blue Oceans -- Dry Land -- White Clouds -- Polar Ice. A Sun-lit planet, teeming with life, framed in darkness.

In 1972, when NASA’s Apollo 17 astronauts first captured an entire hemisphere of our planet, we were treated to such a view. The Blue Marble, it was called. The Space Program’s unprecedented images of Earth compelled us all to think deeply about our dependence on nature and the fate of our civilization.

Of course, at the time, we had other distractions. Between 1968 and 1972, the United States would experience some of its most turbulent years in memory, simultaneously enduring a hot war in Southeast Asia, a Cold War with the Soviet Union, the Civil Rights Movement, campus unrest, and assassinations. Yet that’s precisely when we voyaged to the Moon, paused, looked back, and discovered Earth for the first time.

The year 1970 would celebrate the first Earth Day. In that same year, the Environmental Protection Agency (EPA) and the National Oceanic and Atmospheric Administration (NOAA) were formed with strong bipartisan support. In 1972, the pesticide DDT was banned and the Clean Water Act was passed. And one year later, the Endangered Species Act would be enacted, the catalytic converter would be introduced, and unleaded automotive emission standards would be set. A stunning admission that we’re all in this together, with a common future on a shared planet.

Regrettably, we still live in a turbulent world. But we now have at our disposal, not simply a photograph of our home to reflect upon, but continual data of our rotating planet, captured 13 times per day, by the robotic Deep Space Climate Observatory (DSCOVR), a specially designed space camera & telescope, launched and positioned a million miles from Earth.

We will now be able to measure and track Sun-induced space weather as well as global climactic trends in ozone levels, aerosols, vegetation, volcanic ash, and Earth reflectivity, all in high resolution; just the kind of data our civilization needs to make informed cultural, political, and scientific decisions that affect our future.

Occasions such as this offer renewed confidence that we may ultimately become responsible shepherds of our own fate, and the fate of that fragile home we call Earth.

This is big for our small country! Later this year early next year we enter the space age 🚀
At one stage RocketLab was looking to launch from Mahia.

Space Base in New Zealand Picked to Start Private Trips to Orbit Connecting decision makers to a dynamic network of information, people and ideas, Bloomberg quickly and accurately delivers business and financial information, news and insight around the world. 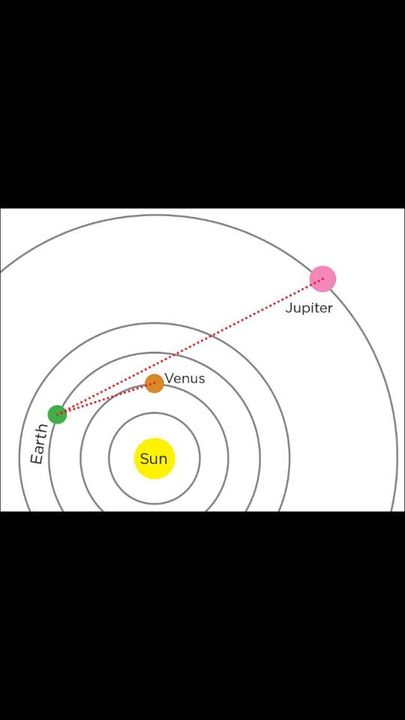 Venus and Jupiter are set to look like two merging stars tonight straight after sunset looking North West. They will be down in the horizon by 9pm

Astronomers flock to NZ for a glimpse of Pluto

New Zealand will have the best view! 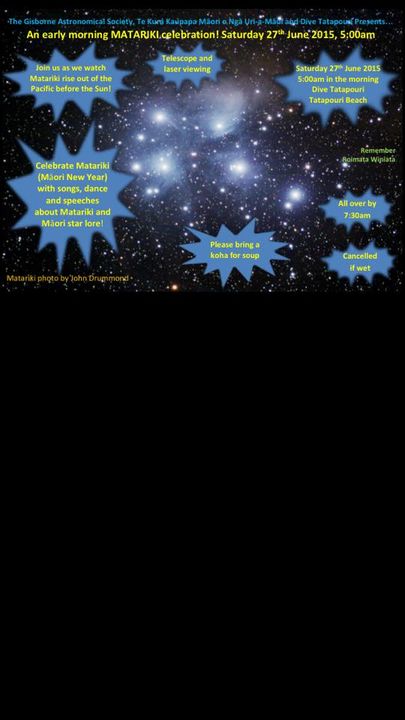 Matariki Celebrations! Come and welcome in the Maori New Year – Matariki – on Saturday 27th June 2015 at 5:00am (in the morning) at Dive Tatapouri, Tatapouri Beach. Enjoy songs, dance, talks and telescope viewing as we welcome Matariki as it rises out of the Pacific. Set the alarm clocks and dress warmly. Tell as many friends as you can. Koha for hot drinks and venue usage. Cancelled if wet.’

We are going to Europa!

Saturday 27th June at 5:00am Matariki will be rising in our skies. Keep an eye out on this page for our telescope viewing event ⭐️

Matariki is the Māori name for the star cluster known as the Pleiades. Traditionally for Māori when it appeared just before dawn in late May or early June, it signalled the start of the Māori New Year. For some tribes, the rising of Puanga (Rigel in Orion) signals the start of the New Year.

Thank you all coming last night! We counted 200 people. We'll keep you updated on events at the Kaiti Hill Observatory which will reopen on the 22nd of May 🔭

We are live on More FM 90.1 right now talking about tonight.

This here is a Gisborne first...
14th of May
Lawson field theatre
$5 at the door

This is hopeful news!

Video of NZ from space

Who would've thought New Zealand could look so beautiful from space traveling at 27,000km/h...

Video of NZ from space The land of the long white cloud has been captured in a beautiful video taken from space. 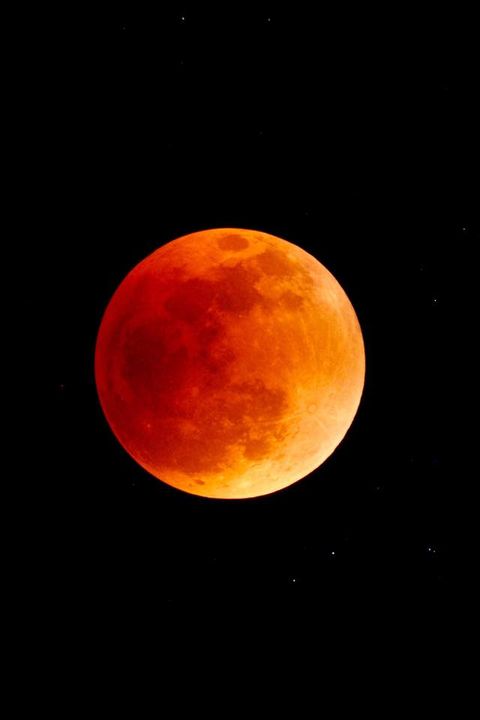 Thanks for visiting our page! We have just launched this new page. We hope you enjoy.

Other Nonprofit Organizations in Gisborne (show all)

#HEAR4U - Advocating for Men’s Mental Health/Wellbeing Awareness and Su***de Prevention throughout NZ. Based in Gisborne, our team creates and supports projects which help men be t...

GACC - A car club for owners of American cars and any other car enthusiasts. An interest in cars is the main criteria.

Mangapapa Scout Group consists of a Cub Pack & Scout Troup based in Mangapapa, Gisborne, New Zealand. We are part of the Waiapu Zone.

Gisborne Volunteer Centre supports and promotes volunteering in our community. For those interested in volunteering, we can point you in the right direction; for those community gr...