Check out whats happening down at the Skate Park over January with the support of local organisations including the YMCA.

A great opportunity to show your talents, hang with your friends and meet loads of new people. 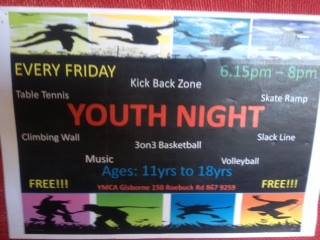 Youth Night is a fantastic opportunity not only for our Youth to have a fun and safe place to hang out, interact and be involved in what the YMCA has to offer, but also for our Volunteers to be a part of such an awesome programme, giving the community an environment they can learn new skills, meet new people and become part of the YMCA family.

Fast 5 Netball tonight at 6pm, on your markies, get your car keys and we will see you there.

Did you know that the YMCA invented the game of Basketball in 1891.

A chap by the name of James Naismith was challenged by his lecturer to come up with a game that could be played inside.

After many attempts and lots of trial and error basketball was born.

Read more about his journey at the link below

A big thank you to First Sovereign, Trans Power, NZ Community Trust, ECT, BDO, Resene, Awapuni Joinery, Kevin Hollis Glass, Gillies Electrical and Eastland Engineering who have made it possible to do valuable upgrades to our stadium.

Their ongoing support has been the lifeline to ensuring we can continue to offer our stadium to our community.

Great night Playing Futsal in the stadium yesterday. fast feet, non-stop running and plenty of goals and the competition hasn't even begun. Still time to enter your team; $150 for 8 weeks of 40 minute games. See YMCA reception for registration forms.


Other Nonprofit Organizations in Gisborne (show all)

Taupua Tairāwhiti is a shared services model developed by Sport Gisborne Tairāwhiti. The aim of th

Maurice & Annie Flood are the new Groundswell representatives for Gisborne, having taken over the po

YMCA Gisborne Youth is a fun, safe and engaging space, you get to be yourself, try new things, netwo

The purpose of Meeting Place is to follow Christ in the most authentic way we know. Biblically Jesus did LIFE with people. He ate with them, hung out with them and taught them abou...

The Care and Craft Centres cater for lonely house-bound people and not so mobile adults, known as guests, who are encouraged to participate in a wide variety of handcrafts and soci...