Concern for democracy – a unique series of dialogues provides a forum for constructive discussion on the crisis - Sitra Russian attack on Ukraine showed Europeans that living in democratic society should not to be taken for granted. In a series of constructive dialogues open for all in April and June, the participants have the opportunity for an in-depth conversation on defending democracy. 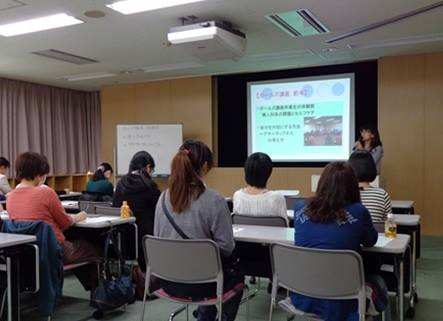 Have you heard that listening carefully can change society, people and households, and can improve communities?
This organization is dedicated to building harmonious communities and achieving a society where people can coexist and live without become socially isolated. It first began to take shape in 1998 in the form of study groups that offered psychological support and “active listening” activities to local residents. Our communities consist of people who have many different personalities, cultures and values. In diverse communities such as ours, support that is based on “active listening,” which teaches people to listen more carefully to one another, can ameliorate a wide range of social problems by reducing the barriers that separate people from one another and by helping people to live together in a more healthy way.

Our Non-Profit Organization (NPO) will undertake, with the support of our members, an even wider variety of activities that can make a significant contribution to society.

Events Leading up to the Establishment of the NPO

1 In response to a request from the Yokohama Municipal Elementary School Community House in 1998 I taught a workshop on dialogue-based counseling. After the workshop ended I established as an on-going study group “The Almond Group: A Study Group for Counseling Based on Listening to the Heart” (currently a member organization of the Tsuzuki Ward Social Welfare Council).

2 The study group was open to all local residents, and soon it was clear that a majority of the participants had children who had developmental disabilities, who had dropped out of school, who had withdrawn from their families (hikikomori), or who had psychological problems with their parents. In many cases the participants themselves felt apprehension about raising children or lived in families that were emotionally unstable. I learned much from helping these people, and as I learned from them I began to offer mental health advice to local residents and support for school dropouts and for families of children who had withdrawn.

4 In 2005 I started the group “Child Raising Aruku (ALC),” which offers same-room day care provided by members of the “Understanding the Hearts of Toddlers Child Raising Study Group.” Staff members also provide individual consultation and daycare services for mothers who are apprehensive about raising their children. The group operates with financial support from the “Social Connections Fund” of the Tsuzuki Ward Social Welfare Council.

5 In 2009 and 2010 I served as a panelist in the “Tsuzuki School Dropouts Forums” that were hosted by Tsuzuki MY Plaza, a facility operated by Tsuzuki Ward. After these forums I began to offer regular support for families dealing with problems of school dropouts and in 2011 I started the group “Guideposts leading out of Truancy: MY Café” with the help of colleagues with training in “active listening” who worked as staff.

6 After consulting with parents, and in response to their requests, I began visiting school dropouts in order to give them individual counseling and offer them educational support. I saw that children could escape their situation as school dropouts and take their lives in new directions when their parents began to listen to them more carefully (using “active listening” techniques). This demonstrated to me the amazing effects that could be attained by providing support to people through “active listening.”

7 In 2010 and 2011, as an activity to support multicultural coexistence, I taught classes about “Living in Japan” that were hosted by Tsuzuki MY Plaza. Working together with the participants in those classes, many of whom were in multiracial or multicultural marriages, I founded the “Green House Café” and began to offer support for people who had problems that arose because of cultural, linguistic or racial differences.

8 In 2010 I began to receive requests to teach classes in active listening in the field of mental health social services. I taught a “Mental Health Social Service Program” at a Regional Care Plaza (a social service organization operated by the city of Yokohama), and as a follow-up activity for the classes I started a Mental Health Social Service Salon in 2011 where active listening volunteers help emotionally impaired people. At the request of the Non-Profit Organization “Itsutsu No Pan” (Five Loaves of Bread), I taught classes in active listening from January to March of 2012 as a pilot project in the Kanagawa Prefecture Regional Mutual Support Activities Model Survey Research Program.

9 Around 2009 I began to see that people I had met many years ago in study groups and who had faced difficult problems were now able to express themselves genuinely through “active listening.” Participants who had practiced active listening for years came to understand that people can alleviate emotional pain by acknowledging one another in their personal relationships and they can eventually learn to empathize and understand the pain of others. These long-term participants appeared to be developing into a group of volunteers who could provide support services in the local community. Moreover, participants in the study groups interacted freely with each other even though they ranged in age from their 20s to their 80s. It is now possible, by working together with colleagues who have become proficient at active listening, to provide support in the local community for people who are facing various difficulties or who have become isolated. With the help of my colleagues who have studied active listening, I began to work toward founding an NPO that would create a “place of the heart” in the local community.

The New Perspective of the NPO

On March 11 of 2011, the year that the 18 founding members gathered together in order to establish this NPO, we experienced the Great East Japan Earthquake. As we observed Japanese society and the people of Japan after the earthquake, we believed even more firmly that civic activities based on “active listening” could help address the problems faced by Japan. The founding members of the NPO are part of the diverse range of men and women who have met over the years in the many study groups, groups that have included Japanese, people with connections to foreign countries, adolescents, university students, children, elderly people, housewives, working people, and people with disabilities. With “active listening”—the idea of listening carefully to what others are saying—as the foundation of our activities, and based on the values of respecting our differences and embracing our diversity, so that all of us can express ourselves with vitality, we aim to work together to create new kinds of local community activities.

The flower of the almond tree, which we have chosen as the name for the NPO, is the first flower to blossom in the spring, while the weather is still cold, and it brings tidings of the coming spring. The almond endures the cold of winter and then puts forth buds that blossom into flowers and mature into fruit, and we have taken this name as a symbol of our belief that individuals who have fallen into difficulty because of the problems they have encountered in life will eventually recover, will receive a new breath of life and will live a life true to themselves.

In the globalized world of the 21st century, Japanese society will need to develop into an inclusive society that can accept people of diverse cultures, languages and value systems. At the same time, the number of socially vulnerable people is increasing because of changes in the economy and growing income inequality. More and more people are suffering, and every year since 1998 more than 30,000 Japanese people have committed su***de giving the country one of the highest rates of su***de in the world. In addition, an increasing number of young people have dropped out of school or have become “shut-ins” who never leave home, causing the young people themselves and their parents an immeasurable amount of pain. Problems of developmental disabilities or problems of parents suffering from income inequality, the fact that our society is based on the principle of competition is one of the factors relating to violence and bullying against young people in homes and schools. Unfortunately, for the young people who hold the key to the future, the Japan of today has become a painful world to live in. As a NPO, we will form partnerships and work together with citizens’ groups, business firms and governmental organizations in order to develop and improve activities that provide support to people in the community.

Our society is like a desert wilderness in which we hope to open up a new path that will lead people to the water of life that will slake the thirst in their parched hearts. We, the members of the Almond Community Network, will work toward achieving a truly peaceful society, one that is inclusive and supportive, one that transcends the barriers between people that arise because of nationality, language, disability and social discrimination.

Behold, I am doing a new thing.
Now it springs forth, do you not see it?
I will make a way in the wilderness, and rivers in the desert.

Join the only Global Nikkei Youth Summit where young nikkei leaders from all around the globe come and get ready to make change on this #YK15. Welcome!

Alhamdhulillah, Yokohama Grand Masjid has been opened for prayers since 29th Dec 2006. 5 times prayers & other events are being held in Masjid. We also have children education &...