AN ONLINE MEDIA NEWS PLATFORM FOR THE RESIDENTS OF CHANDIGARH. PANCHKULA, MOHALI & NEARBY AREAS....O 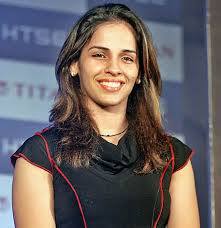 Badminton joined the big league in India on Monday when ace shuttler Saina Nehwal fetched $120,000, or Rs65.28 lakh, at the players' auction of the IPL-styled Indian Badminton League that can potentially encourage many youngsters to take up the sport.In a keenly watched auction in a city hotel, Hyderabad Hotshots team bought world No. 3 Nehwal, while Wei emerged the most expensive player when Mumbai Masters bid $135,000, or Rs73.44 lakh, for the Malaysian star.
he Badminton Association of India has distributed team franchises among businessmen, sportspersons, actors and even realtors, including the Sahara Group, Dabur's Mohit Burman, cricketer Sunil Gavaskar and actor Nagarjuna."In the next ten years, an estimated Rs150 crore is expected to be invested in the League by franchise owners," said Ashish Chadha, chief executive officer of Sporty Solutionz, a consultancy firm that is working with the badminton association (BAI). He said each team owner will invest up to Rs10 crore every year, including players' fee, franchise fee to BAI and marketing costs.

LONDON—Prince William’s wife, Kate, gave birth to a baby boy on Monday, providing Britain’s royal family with a future king in an event that had been anticipated around the world, Kensington palace said.
Crowds cheered and rushed towards the gates of Buckingham Palace as it was announced that the Duchess of Cambridge had produced a male heir weighing 8lbs 6oz (3.8 kilos).
The baby will be third in line to the throne and in the direct line of succession after head of state Queen Elizabeth II’s eldest son and heir Prince Charles, and then his eldest son William.
“Her Royal Highness The Duchess of Cambridge was safely delivered of a son at 4:24 p.m. (1524 GMT) 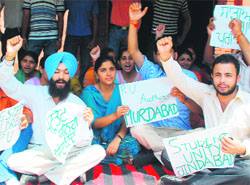 National Students Union of India (NSUI) staged a protest outside the Vice Chancellor (V-C) office regarding certain pending demands of the students of science streams. The party demanded that BSc students with 90 per cent credit should be promoted to MSc, students who had re-appeared should be allowed to take the re-examination in the month of July/ August and re-appearance fee for Physics and Electronics courses should be rolled back.

The Students Organisation of the Panjab University (SOPU) also staged a protest raising the same demands.

Finally, Dean Students Welfare (DSW) Prof A S Ahluwalia reached the venue and listened to the problems of the students and assured them that he would look into the demands and the decision will be in favour of the students only. NSUI president Manoj Lubana said: with the positive attitude of the authorities 200 students will be benefited.

AN ONLINE MEDIA NEWS PLATFORM FOR THE RESIDENTS OF CHANDIGARH. PANCHKULA, MOHALI & NEARBY AREAS....OUR MOTTO IS NEWS FOR THE PEOPLE, OF THE PEOPLE AND BY THE PEOPLE....HERE YOU CAN SHARE YOUR VIEWS AND OPINIONS AND GAVE A VOICE AGAINST UNJUSTICE.

AN ONLINE MEDIA NEWS PLATFORM FOR THE RESIDENTS OF CHANDIGARH. PANCHKULA, MOHALI & NEARBY AREAS....OUR MOTTO IS NEWS FOR THE PEOPLE, OF THE PEOPLE AND BY THE PEOPLE....HERE YOU CAN SHARE YOUR VIEWS AND OPINIONS AND GAVE A VOICE AGAINST UNJUSTICE.

Other Chandigarh media companies (show all)

Mantrin is an INS accredited agency with a vision. One of the leading Brand Consultancies of the reg

Browse our complete collection of fresh, modern, fashion-forward phone cases and accessories to find the design that tells your story proudly and boldly.

I am a researcher, writer, and a journalist

Hello, AquaVision Is A Production Media Team. We Provide You Best Quality Work In Sectors of Videogr