Tech team of MARATHWADA INSTITUTE OF TECHNOLOGY͵AURANGABAD͵ performing under MARC (MIT Automation and Robotics Club).Join us and support us...

Productivity is never an accident. Its always the result of commitment to excellence, intelligent planning and focused efforts. Introducing #Autobotz2k17 with all new stuff and excitement. Do participate..!

Do like our Instagram for more behind the scenes of the best tech team of the region. 😎
#robotics #bleedMIT #robocon

1 Likes, 3 Comments - team_innovators (@teaminnovators) on Instagram: “The waves can only camouflage but the monster always rises from the darkness.. "Monster In Making"…”

As the clock moves closer for one of India's biggest automobile engineering event, the saying holds true today "Wings are meant to fly..."
We want to wish 'Team Wings, MIT' as they go in BAJA SAE INDIA 2017 all the best wishes and hope to welcome a victorious Phoenix home...
#BAJASAE #bleedMIT #supportMIT

Get ready Aurangabad, for Grand inauguration of MIT's Aurangabad Heritage half marathon, on 26th November at MIT college, Beed Bypass, Aurangabad..by none other than the legend Milkha Singh himself!!
अब तुम भगाओ मिल्खा 🏃🏃🏃

The U.S. military is going to have more robots than people

🍍🍌🍲🎂🎂🎂🎂#The person who have always fascinated us by going out of stream. And inspiring us to do the same. Today on the auspicious day of his birthday our whole team wants to wish him best to achieve more miles stones ahead.
🎂🎂Happy birthday ankur sir...😘😘😘😘.God bless u always💰💰💰

The Guardian: Do no harm, don't discriminate: official guidance issued on robot ethics.

theguardian.com Robot deception, addiction and possibility of AIs exceeding their remits noted as hazards that manufacturers should consider

The best news of the day 😍 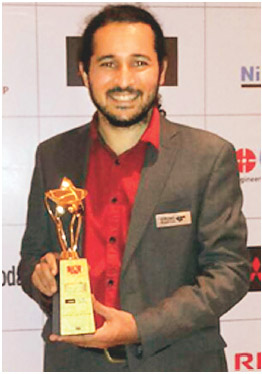 #congratulations_sameer_sir
#GrindMaster, Aurangabad Chief Executive Officer Sameer Kelkar was bestowed with the Next Generation Leader award by Manufacturing Today, a magazine dedicated to manufacturing industry, recently. Kelkar, an alumnus of IIT Mumbai and UC Berkeley, California, received the award during a function held in Pune.

either legends wake at 5 or sleep at 5, our legends innovate at 5...
electronics they say the blood of the system...
#team #innovators #electronics #nightwork #pcb #workshopcoming #anticipation #work #seniors #perfection #robocon #glory It is here... Mark the dates in your itenary, 18,19 and 20th September... The biggest robotic event of Aurangabad... Hurry, limited seats. Registration closes soon...

After 134 years, the Sagrada Familia in Barcelona is finally almost finished.

This laser brings power-washing to a new level

Students Selected For Personal Interview
Wish You All The Best !!!

[08/25/16]   TEAM SELECTION for ROBOCON 2017
All MITian are hereby informed that the TECH TEAM of MIT named TEAM INNOVATORS is recruiting new members for international robotic competetion which is to be held in march 2017.
All interested students do submit your registration form till 25th of august, in Robocon lab. And form is available on anushree xerox centre and next to pet pooja.
For any inquiry contact.
Ashish - 8421318111
Gokul - 77699 56994

Other Robotics in Aurangabad (show all) We are a fresh Indian tech startup comprised of inspired young engineers working in the field of Mobile Robotics, or as we put it, Mobotics! Starting with core industrial robotics & automation, with technocrats peoples in the field of automation; incorporated in 2015.

We provide skill training through on the job training, practical oriented training programs for enhancing employability of youth. We have the tools, knowledge and experienced professionals to evaluate your operation and determine perfect automated solution is right for you.

Next Generation Robotics offers hands-on and fun way for kids to learn Science, Technology and Engineering concepts by letting them to build their own Robots Vidya Robotics is a hardware innovation lab, where you can learn robotics, electronics, embedded systems, and make interesting projects