Chale U for Rent

[12/11/16]   We're back to work. Restored services.
Do you need man guards for your properties, installations & establishments?
Do you need technical security systems such as CCTV, Electric fences, Access controls, NMS, etc?
Private investigations?
Debt recovery & management?
Anything security, call us.
+233507154154, +233208274500 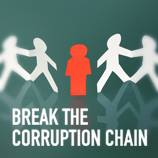 Leading up to the International Anti-Corruption Day on 9 December, UNODC and the United Nations Development Programme (UNDP) have launched a campaign to raise awareness about corruption, which calls for people from all walks of life to take action against this crime.

The slogan 'Break the corruption chain' encourages Governments, the private sector and the general public to tackle this issue by changing their attitudes.

[10/29/15]   How conscious are you of your immediate environment?
Always endeavor to observe what's happening around you and ensure you're always safe.
#observe_beprepared_act

INTERPOL has offered Nigerian authorities its full support in helping locate more than 200 schoolgirls kidnapped by Boko Haram as Secretary General Ronald K. Noble condemned in the strongest terms the actions of the Nigerian terror group.

In a letter to Nigeria’s President Goodluck Jonathan, the INTERPOL Chief said the world police body stood ready to provide whatever assistance required in the location and safe return of the girls to their families, and to bring those responsible to justice.

“The appalling abduction of the schoolgirls has been compounded by their continued detention at the hands of depraved cowards who understand neither mercy nor compassion,” said Secretary General Noble.

“Our thoughts are with the victims of the kidnapping and their loved ones at this very difficult time, and INTERPOL stands ready to provide whatever assistance is asked by Nigerian authorities,” concluded the head of INTERPOL.

Among the support offered is the immediate publication of Yellow Notices for the schoolgirls, which can be circulated to all 190 member countries at the touch of a button to assist police worldwide locate and identify the kidnap victims.

INTERPOL has also offered to deploy an Incident Response Team (IRT) to Nigeria to provide on the ground assistance to the National Central Bureau in Lagos and any involved national law enforcement agencies requiring investigative and analytical support.

In late April, nearly 300 schoolgirls were kidnapped from a dormitory by armed militants in the Nigerian town of Chibok. Days later, Boko Haram leader Abubakar Shekau said in a video statement that the group planned to sell the schoolgirls into slavery.

ISS Africa | International criminal justice in Africa: it's not all about the ICC

issafrica.org Despite the fraught relationship between the International Criminal Court and the African Union, progress is still being made in delivering justice.

ISS Africa | Conflict in the Central African Republic: it's not just about religion


issafrica.org Thousands of Muslims are fleeing the CAR, but the problem started with the collapse of the state.

ISS Africa | South Sudan: What is really standing in the way of lasting peace?

issafrica.org With so much focus on state-building in South Sudan, deeply entrenched problems of power and ethnicity have been overlooked.

The temperature over the Nile issue shot up to the highest point recorded in recent history. It may not have reached crisis level yet, but the tension between Egypt and Ethiopia has reached a point where a cool-headed diplomatic engagement will be required to prevent it from further escalation.

Two years ago Ethiopia began the construction of the Great Ethiopian Renaissance Dam (GERD) and it is reported that more than 20% of the project has now been completed. On 28 May, Ethiopia announced that it had successfully undertaken the diversion of the Blue Nile, a major tributary of the Nile River, in order to continue construction on the river bed. In Egypt there was already a great deal of concern – even paranoia – over the possible impact of the dam on its water security. It is no surprise, given the widely held myths and views in Egypt about the Nile, that the diversion of the Blue Nile has triggered extreme reactions.

Prompted by the public outcry, the Egyptian president, Mohamed Morsi, held a consultative meeting with the country’s political elite. The discussions in President Morsi's office were televised. The whole world now knows what was said in that meeting and this has created a diplomatic and political disaster. Shockingly, proposals made in the meeting included threats that force would be used against Ethiopia, meddling in Ethiopia’s politics, sabotaging the GERD, arming opposition groups and supporting Ethiopia’s opponents.

In so doing, Egypt has shot itself in the foot. According to the Egyptian news website Ahram Online, the meeting ‘was full of what some Cairo-based African diplomats described as a condescending Egyptian reflection on Africa’. Ahram Online also stated that ‘diplomatic and intelligence sources … share “grave concerns” over some of the “unbelievable and outright ridiculous statements” that were made during the controversial meeting’. An unnamed senior Egyptian government official acknowledged the great political and legal harm that has been caused: ‘Up until that meeting we were in a very strong position as a country that suffers from serious water poverty and … faced with a unilateral decision of an upstream state to further cut [our] legally stipulated share of water; today we are … openly masterminding political unrest and maybe even a military offensive against neighbouring states; this could have some serious legal and political ramifications’.

The Nile issue is a major rallying point in Egypt and constitutes a major national security concern. An opposition politician said that ‘this goes beyond our internal political disagreements to a very serious national interest matter’. Although Egypt’s position has weakened, the desire and need to take measures to protect what it considers to be its long-standing ‘national interest’ on the Nile are unlikely to be abandoned. Indeed, on 10 June, President Morsi stated that ‘all options are open’ and that ‘if it [the Nile] diminishes by one drop then our blood is the alternative’.

Such a threat of war is prohibited under Article 2(4) of the United Nations Charter and Article 4(f) of the Constitutive Act of the African Union and thus lacks any support under international law.

The kind of measures that Egypt chooses to adopt will influence whether the rising tension reaches a crisis point or dissipates. Although the racially charged views and the threatening posture of Egypt may deprive Egypt of support from Africa and major global powers, it is possible that the expressed views of the political elite may not change. Moreover, some of the approaches that were suggested in the meeting may even have enough support to be considered in the formulation of the courses of action that Egypt may eventually consider. And it is important to recognize that Ethiopia is vulnerable. Apart from the existence of armed opposition groups, which can easily be propped up, Ethiopia is unlike most other countries in terms of vulnerability to regional crisis because of its geo-strategic location. It is the only country that shares borders with six of the seven states of the Inter-Governmental Authority on Development (Uganda is the exception). Ethiopia is therefore closely affected by the conflicts in the region, such as the one in Somalia. Consequently, an Egyptian military team’s visit to Mogadishu soon after the controversial televised meeting may be pure coincidence, but is likely to be received with concern in Addis Ababa. The Horn of Africa is also a region with a history of proxy wars and a tendency for the region’s states to support one another’s oppositions and armed groups. Ethiopia’s location makes it particularly vulnerable to such tensions, illustrated by the unresolved conflict between Ethiopia and Eritrea.

What measures can be adopted to bring the temperature down in Nile relations? An aggressive process of constructive engagement is needed. The starting point should be to end threatening rhetoric. Significantly, both countries need to adopt a number of confidence building measures.

On the one hand, while rejecting the threats of war, the Ethiopian government needs to show an understanding of Egypt’s sensitivities. There is understandable anxiety and paranoia among the Egyptian public. Taking cognizance of this as well as the ongoing political changes in Egypt and the entire region, it is important for Ethiopia to engage with and reassure Egypt. It would be necessary to more effectively publicise the ways in which the GERD project will benefit the entire region and can be implemented in a way that limits its impact on the level of water flow. It is critical to tap into opinion makers in Egypt who understand the mutual benefits of the project. Although it is necessary for Ethiopia to closely monitor the measures that Egypt may adopt and their possible implications, an effort should also be made to involve all the Nile’s riparian states whose role should be brought to bear on attempts to cool the heat down. Sudan is strategically placed to play a particularly crucial role.

For its part, Egypt’s political leaders should avoid political rhetoric that propagates non-peaceful methods including the threat of use of force, proxy war or sabotage. And Egypt has the right to insist that the two countries cooperate to ensure that the impact of the GERD on the flow of the Nile is minimised. In addition, as Egyptian commentator Mahmoud Salem points out in a sobering article, it would be worthwhile exploring how the GERD may be harnessed for Egypt’s benefit. Examples include reducing loss of water through evaporation and accessing the hydroelectric power that the dam would eventually generate.

If these steps are not taken, there is a serious risk that the hostility will escalate into unnecessary regional crisis. Hopefully there is enough wisdom and leadership to end the tension and even use it for achieving a mutually beneficial cooperative settlement for the peoples and countries of the region.


Accra
Accra
0302
Other Financial Services in Accra (show all) We are a Tier 2 financial institution, established in March, 2008 and regulated by the Bank of Ghana with commitment to providing convenient banking services We have in stock all kinds of electrical materials from conduit pipes, cables and finishing SPECIALIZE IN ALL GHANAIAN LOTTORIES At Allianz Ghana we are active in all lines of insurance (Home, Life, Travel, Motor, Corporate etc). Allianz, Your Companion for Exploring Life!